The following is my entry in the O Canada Blogathon, being hosted Feb. 1-5, 2016 by the blogs Speakeasy and Silver Screenings. Click on the above banner, and read blog entries related to Canadian personalities and subject matter that have contributed to cinema!

There’s no way you can describe the vibe of “SCTV” (TV series, 1977-84) to anyone who wasn’t in on it to start with. It’s like trying to describe how you felt when you saw the original cast of “Saturday Night Live.”

However, for the pop-culture-history-impaired, “SCTV” was set at an imaginary TV station that allowed for wacko “local” characters as well as dead-on parodies of any major film or TV show you’ve ever seen. Since the show was produced in Canada, Canadian TV decided they needed two minutes of Canadian content each week. Thus were born Bob and Doug MacKenzie (Rick Moranis and Dave Thomas), two toque-wearing siblings who blathered on about the virtues of beer and back bacon. 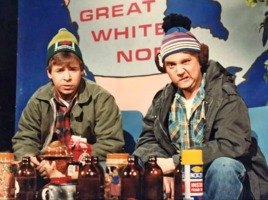 “Bob and Doug Mackenzie” were like “SNL’s” “Wayne’s World” in the early 1990’s. The first time I saw them, I completely did not get them. After that, I couldn’t wait for their next appearance.

All that is by way of saying that Strange Brew is about as funny a movie version of the Mackenzie Bros. sketches as you could ask for. The movie begins predictably (and hilariously) with Bob and Doug trying and failing miserably to move their “Great White North” TV segment into feature films. (The moment where Doug does the “movie theme” kills me every time.)

From there, the movie goes on to a half-baked plot about the brothers uncovering espionage at the local brewery (run by Paul Dooley and Ingmar Bergman veteran Max von Sydow, neither of whom seems to have any idea how they got into this movie). Basically, it plays like a Cheech & Chong movie for the 1980’s, with beer taking the place of illicit drugs. 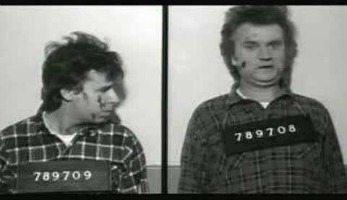 That said, it manages to come up with a fair number of laughs, as when the Mackenzies take brief digs at Star Wars, or when their dog “Hosehead” unexpectedly saves the day at movie’s end.

If you’re unfamiliar with the Mackenzie milieu, the DVD of the movie will help you out. It has an old “SCTV” Mackenzie sketch, as well as a brief but funny animated version of the brothers. 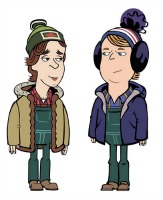 Great comedy can never be properly explained to the uninitiated. On that basis, Strange Brew is a classic.