The following is my entry in The End of the World Blogathon, being co-hosted by this blog and The Midnite Drive-In from March 30 to April 1, 2018. Click on the above banner, and read bloggers’ takes on a variety of movies with apocalyptic and post-apocalyptic themes!

There are a lot of great movies whose end-of-the-world themes have inspired food for thought. But what happens when filmmakers’ intentions (or pretensions) outstrip their talent? There are probably a dozen Robot Monsters for every Dr. Strangelove.

So for this blogathon, I thought I’d take a look at what happens when an apocalypse-minded filmmaker with minimal talent gets behind the camera. My first example is fictional (though all too plausible); the second example is a very real (and bad) piece of cinematic history.

Quick comedy history lesson: “SCTV” (1977-1984) was a half-hour, “Saturday Night Live”-type spoof of TV and movies that, even though its roots were in the Second City improv troupe in Chicago, was taped in Canada. When the show became popular, Canadian TV execs insisted that each episode must contain two minutes of Canadian-based content.

From this dry idea were borne Bob and Doug McKenzie (Rick Moranis and Dave Thomas), the dim-witted sibling hosts of “The Great White North,” a weekly show in which they shared tips on the best way to cook back-bacon, and how to get liquor store refunds by sticking a live mouse in an empty beer bottle.

As with many “SNL” stars, Moranis and Thomas couldn’t resist expanding their brief sketches into a feature-length film. Although it later segues into a formulaic plot, Strange Brew (1983) begins with a “Great White North” sketch in which Bob declares, “We made a movie, eh?” With that, the duo show us their movie, an ultra-low budget sci-film that runs for an excruciating minute-and-a-half before, happily, the film breaks.

If you’re not already familiar with Bob & Doug or “SCTV,” it’s hard to say how this mini-epic will play out of context. IMHO, it’s a perfect depiction of every movie fan who ever had too much time on his hands and got hold of a movie camera. 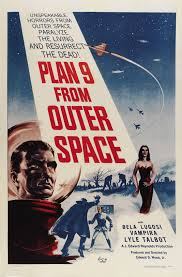 Plan 9 is the immortal choice of bad-film lovers everywhere. And yet, it’s so entertainingly bad that one almost wants to believe that this is exactly what producer-writer-director Edward D. Wood Jr. had in mind all along. There have been far more sincere films, with far bigger budgets, that ended up with the same results as this movie. (If memory serves, one pundit referred to John Travolta’s 2000 pet sci-fi project Battlefield Earth as “Plan Ten from Outer Space.”)

The premise is that some outer-space beings (including future TV director Joanna Lee) have launched eight previously botched attempts to claim Earth for their own, and evidently the only plan that will get it right is to bring some corpses from a San Fernando Valley cemetery back to life. And yet, if the key sign of a sci-fi film’s success is that it successfully establishes an otherworldly environment, then Plan 9 succeeds in spades. The film is filled to capacity with:

* non-existent continuity — as a writer once said about Leo McCarey’s work in the Marx Bros.’ Duck Soup, if two shots don’t match, Wood’s answer is to throw them together and let them fight it out.

* strangeness accepted as normality. Prime example: Washed-up star Bela Lugosi died three days into filming and was replaced by Wood’s chiropractor, who was taller than Lugosi and who “doubled” for him simply by masking his face with a black cape.

And yet, many latter-day movies and TV shows ask us to accept just such incongruities in the name of entertainment. For example, we’re meant to accept a bare desk with a goose-necked lamp as being the office of a Pentagon official. Pretty silly. And yet, is NASA’s headquarters conveyed any more realistically on “I Dream of Jeannie”? And any number of sitcoms have dialogue that doesn’t sound any more “life-like” than the stuff that pops from the mouths of Wood’s actors.

It takes a special sense of mise-en-scene to present a facade so weird that it takes on a life of its own. For that alone, Plan 9 from Outer Space deserves its spot in film history.