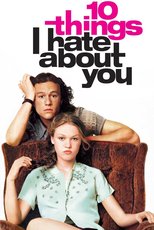 Seven things I hated about 10 Things I Hate About You:

1. The movie’s gimmick is that Bianca (Larisa Oleynik) is barred by her hermetic father Walter (Larry Miller in yet another thankless role) from going on a date until Bianca’s sister Katarina (Julia Stiles) decides to ever date a man. That seems pretty unlikely, given that Katarina is a male-hating, insult-spouting bundle of neurosis. Somebody involved in the movie thinks this is an original character, but I saw About Last Night… (1986), in which Elizabeth Perkins played the same sort of self- and man-hating hag. We’re meant to feel sorry for this kind of character because she’s been so hurt that she lashes out at the world in spite. Personally, I feel that this sort of character gets what she deserves.

2. The movie thinks it’s clever just by doing hip updates of William Shakespeare’s comedy The Taming of the Shrew. What a pity that this movie is readily available on video, and episodes of the 1980’s TV series “Moonlighting” are not. “Moonlighting” did a killer take on Shrew that had more laughs in the opening credits than are in this entire movie.

3. Updating Shakespeare to modern-day high school is a nice concept, but the movie’s script never develops the concept any further. Instead, it does a lot of dumb sitcom-like jokes to curry favor with the teenaged viewers most likely to rent this movie. In fact, I’d be amazed to see any high school in America that is run like the one in the movie. The teachers regularly curse out the students and get no reprisals for it. Sure!!

5. The Walter character is a beaut. Two daughters, and he barely lets either of them experience the real world. When one of the girls actually is allowed to go out, Walter insists she wear a “pregnancy suit” to remind herself of the dangers of sex. And that leads to…

6. There isn’t an event that isn’t motivated by anything other than the urge to get a cheap, sitcom-type laugh. The guy (Heath Ledger) who eventually woos and wins Katarina can’t just sing a song to Katarina — he persuades the high school band to back him up. Never mind that most high school bands need weeks of practice just to do a simple half-time-show number. And when Katarina wants to divert a teacher’s attention in order to get her guy out of trouble, she flashes her breasts at the teacher in front of an entire class. Don’t tell me that either Katarina’s action or the teacher’s reaction wouldn’t send the local school board into apoplexy.

7. Two women, Karen McCullough Lutz and Kirsten Smith, are credited as the screenwriters for this tripe, proving that females in Hollywood can sell out as easily as males do.

One thing I do like about this movie is the climactic scene where Bianca and her boyfriend are challenged by the local macho student, and it looks like the typical “two guys fighting for the girl’s honor” scene. Instead, Bianca takes matters into her own hands and decks Mr. Macho. In a movie with a supposedly feminist slant, this is the only scene that smacks of modern-day reality.