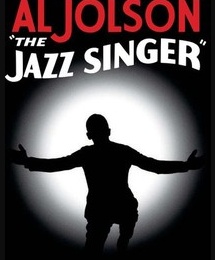 Despite its place in movie history, The Jazz Singer must be approached with a caution usually reserved for radioactivity.

The backstory is better than anything in the movie. The Warner Bros. studio, on the brink of folding, risked investing in a sound-on-film system in the silent era. The movie was based on a popular Broadway play. The starring role went to Al Jolson, a singer whose wild popularity was the ’20s version of Beatlemania.

The movie was not the first “talkie,” and it is largely dialogue-free. Jolson’s singing was the initial sound draw. But the movie’s success is believed to have come from Jolson’s improvised dialogue, where twice he declares, “You ain’t heard nothin’ yet!” — five words that changed movie history.

So much for the interesting part — now we come to the movie’s story. It’s a creaky conflict between good Jewish boy Jakie Rabinowitz (Jolson) and his cantor father. Papa wants Jakie to sing beside him at his New York synagogue. But Jakie forsakes his heritage for a musical career in California.

Jakie anglicizes his name to Jack Robin, gets a girl, and is called to appear on Broadway. Jack’s stubborn father takes ill and expects Jack to sing “Kol Nidre” at the synagogue — on the night of Jack’s Broadway premiere. Could any more buttons be pushed here??

The story is melodrama in full bloom, and it has not aged well. (If you need further proof, check out the 1980 remake with Neil Diamond and Sir Laurence Olivier.)

The movie’s cause is not helped by racial stereotyping that was common in its day but is jaw-dropping now. Jack’s hand-wringing papa is played by Warner Oland, later to caricature another race as the star of the Charlie Chan movie series.

And the DVD’s packaging does its best to hide the movie’s dirty little secret: Nobody loved blackface more than Al Jolson. (In the movie’s finale, a “blacked up” Jolson belts out “Mammy” to his mother.) Google this movie on the Internet, and you’ll find countless promo posters of Jolson happily emoting in blackface. Strange, isn’t it, that the DVD’s cover (shown above) shows Jolson only in silhouette?

The DVD set’s extras are lavish, with a documentary about cinema’s “talkie era” and over three hours of early sound short subjects. But then there’s that irony-free story of a singer aiming for fame not only by denying his own racial heritage, but defaming another race while doing it. It hangs over this historic movie like a pall.

(Here’s another creaker — the movie’s original theatrical trailer, which is a full seven minutes long.)