The following is my entry in the Against the Crowd Blogathon, hosted by the blogs Dell on Movies and KG’s Movie Rants, with entries being accepted through Aug. 20, 2017. You can click on the above banner to read more about it, but here are the blogathon rules:

1. Pick one movie that “everyone” loves (the more iconic, the better). That movie must have a score of at least 75% on rottentomatoes.com. Tell us why you hate it.

2. Pick one movie that “everyone” hates (the more notorious, the better). That movie must have a score of less than 35% on rottentomatoes.com. Tell us why you love it.

3. Include the Tomatometer scores of both movies.

Here are my entries.

Cast Away is one of those movies whose little epiphanies are better than the sum of its parts. When director Robert Zemeckis and producer-star Tom Hanks aim for profundity at movie’s end, the whole enterprise threatens to flitter away like the feather in their previous collaboration, Forrest Gump (1995). 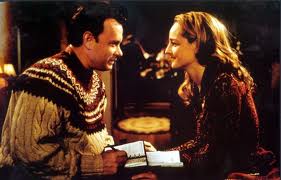 Hanks plays Chuck Noland, an officious Federal Express executive who is the embodiment of the maxim “Time is money.” (By the way, FedEx gets product placement in this movie like you wouldn’t believe.) Helen Hunt plays Kelly Frears, Chuck’s long-suffering girlfriend, who has to coordinate her and Chuck’s schedules just to spend New Year’s Eve with him.

On the way to one of his FedEx flights, Chuck discreetly passes an engagement ring to Kelly, asks her to think it over, and tries to understate his latest mission by telling her, “I’ll be right back.” Forgive me for revealing that Chuck’s last statement is incredibly wrong.

The middle third of the movie is ostensibly about Chuck getting stranded on an island, being humbled by forces of nature, and having to reinvent himself. And for the most part, Tom Hanks carries off this scenario quite admirably. Yet I never completely got engrossed in this adventure, as I would have if Robert DeNiro had done a similar outing. In the back of a viewer’s mind will lie two questions:

(1) How much of this story’s appeal is in watching Tom Hanks pull off an actor’s coup?

(2) Would we be as willing to watch such a tour de force if this was an independent production with some no-name actor, instead of Hanks with all of his Hollywood clout behind him?

To be sure, Hanks’ more interesting moments show his skills at subtle physicality. Witness his first act after washing up on shore — he collects the FedEx packages that wash up with him, ever the dutiful company man. And the uses he makes of the contents of those packages are refreshingly unpredictable.

But then there’s this business with the volleyball. In his desperation for companionship, Chuck takes a wayward volleyball, uses his own blood to paint a face on it, names it Wilson, and takes this ball to the very limits of a platonic relationship. And you begin to wonder how much of this is truly a commentary on man’s need to connect, and how much of it is Tom Hanks trying hard to get nominated for another Oscar.

(Also — MAJOR SPOILER!! — how is it that the movie makes so much of Chuck’s “friendship” with Wilson while he’s on the island, and then we never hear about this later? You’d think there’d be at least one throwaway line about it: “Y’know, I was so desperate for communication on that island, I made friends with a volleyball!”)

And without giving away the ending, let’s just say that Zemeckis’ Forrest Gump and Contact took similarly far-out premises and developed them to far more satisfying conclusions. By contrast, the ending here promises far more than it delivers.

Overall, the movie is worth perhaps one viewing for its little surprises and for Tom Hanks carrying the major part of the story. (And most of the minor stuff, too, because Helen Hunt’s Kelly has a Memphis accent that comes and goes with the breeze.) But when Tom Hanks tries to wax philosophical about the tide on Chuck’s remote island, one gets the feeling that he and Zemeckis are trying for more mythmaking along the lines of Forrest Gump’s “Life is like a box of chocolates.”

From the smarmy tone of reviews for Flubber, you’d think The Disney Co. had tried to remake Gone With the Wind as a comedy. Was the original Absent-Minded Professor treated with as much reverence in 1961 as it is now?

Granted, the remake (scripted by Home Alone vet John Hughes) hasn’t updated the story much, and the villains and the slapstick are as corny and one-dimensional as in the first movie. But that seems a blessing in an era where gas-passing is considered the height of children’s comedy (see Disney’s Rocketman).

As the professor whose obsession with the rubbery creation Flubber is literally single-minded (three times, he forgets to attend his own wedding), Robin Williams is even more straitlaced than Fred MacMurray was. But that might be a blessing, too. Williams gets so caught up in his character’s attention to minutia that it mellows his own rhythms. It’s a nice change to see him play a recognizable, faulty person instead of trying to charm us with his crazy-pixie routine.

Ironically, the movie’s weakest moments are in the nods to ’90s movie technology. The most annoying addition is the professor’s computer, Weebo (voiced by The Little Mermaid‘s Jodi Benson), which exhibits film clips on its screen to express its feelings. That might have been a cute gimmick, if the clips weren’t mostly of old Disney cartoons. And strangely enough, Williams’s most emotive moment is when he cries over the machine’s demise.

There is also a scene where the Flubber goes into a manic dance that is supposed to bowl us over with laughter (the number even gets a credit at the start of the movie). Having seen a whole movie of this kind of stuff (Toy Story) where it worked much better, it’s hard to get worked up about this single scene.

But whenever inspiration starts to flag, there’s usually a nice moment of physical comedy to carry the day. And perhaps I’m thankful for small favors, but I was gratified to see a John Hughes-scripted movie whose comic climaxes didn’t involve kicking a villain in the crotch.