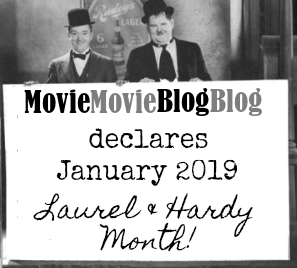 The following is the final entry in this blog’s self-anointed Laurel & Hardy Month. Wondering why we did this? Click on the above image for our explanation!

(PREFACE: Atoll K, Laurel & Hardy’s final theatrical film, seems to have undergone some revisionist viewing over the last few years. As a result, there are L&H fans who find enough in the movie to enjoy it, while others share the initial general consensus [including Stan’s] that the film is a painful disaster to watch; count me among the latter. [Full disclosure: I showed the movie at one of my Tent meetings a few years ago, and most of the attendees said they really enjoyed it.]

I state all of this to show that my review of this book is obviously colored by my take on the movie. Your mileage may vary.) 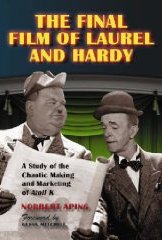 I am of two minds after reading The Final Film of Laurel and Hardy (McFarland, 2009). On the one hand, the book is a meticulously researched and detailed history of L&H’s final movie. On the other hand, considering how mostly unbearable the book’s subject is to watch, the book is rather like using a state-of-the-art telescope to examine an anthill.

Author Norbert Aping obviously wrote this book with the best of intentions, and he probably did so at the right time. For decades, L&H legend maintained that (a) everything that needed to be said about L&H’s movies had been said by the late 1970’s; and (b), the quality of Laurel & Hardy’s movies went straight downhill after they left the Hal Roach Studios and were forced into the “studio system” manner of making movies. But Randy Skretvedt’s glorious L&H bio proved the first theory to be wrong, and Scott MacGillivray’s revisionist bio put the lie to the second theory. So Aping must have figured that the time was right to revisit Atoll K and show that it wasn’t nearly as bad as it’s been made out to be.

The trouble is that Atoll K — or Utopia, as it is more commonly known from public-domain tapes and DVDs — speaks for itself, often quite bitterly. If you start watching an L&H/Fox film with the knowledge that The Boys were often hampered by the studio system, there are still moments — indeed, entire scenes — of the Fox films that you can enjoy. But you can make all the excuses in the world for Atoll K, and yet once you are assaulted with Stan’s sickly appearance, Ollie’s larger-than-usual obesity, horribly dubbed foreign actors, and subplots that come and go with the wind, the movie practically talks you out of laughing at it for long stretches of time.

Aping is so eager to plead a positive case for the movie, he ends up doing his own schizophrenic dance trying to cover his tracks. At one point, he’ll tell you that distributors who were several generations removed from the original film have tampered with it and ruined it with editorial omissions. Then later, he’ll say that excisions which were never called for by the movie’s original makers have considerably improved the story and tempo of the movie.

Aping also points out that different countries’ versions of Atoll K (in America, England, and Europe) are very different from each other, ostensibly concluding that if we could get only one, clearly realized version of the movie, we’d all realize what a masterpiece it could have been. But unlike film buffs who still search the world for a complete print of The Rogue Song or Hats Off, there’s never been a documented case of anyone (other than, perhaps, Aping) who has viewed Atoll K and determined that there’s a pile of gold buried somewhere beneath this drek.

Also, as detailed as Aping’s book is, it still leaves several questions unanswered. One is why Stan Laurel — who, at the Roach Studios, was famous for throwing aside a script in favor of improvising his comedy — was so unquestionably attached to the notion that a good script would have made this movie better, when all evidence along the way demonstrated otherwise.

Another anomaly is that Aping is inexplicably pleased about any script development that shows the supporting characters carrying the majority of the plotline and/or the comedy. For a movie that its European producers were eager to plug as Stan and Ollie’s return to the big screen, it’s very bizarre that nobody connected with the movie was bothered by L&H being removed from the storyline (by mostly inferior and irritating supporting characters) for long scenes at a time.

Aping’s obvious research and good intentions are to be commended, and any L&H buff would like very much to believe that the movie Aping describes is the movie as it stands. But considering that the movie inspires more nausea and sorrow than laughs from its viewers, one is very surprised that Aping maintains, in his final line of the book, that “These two comic gentlemen had no need to be ashamed of their final film together.”