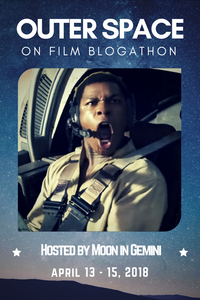 The following is my entry in The Outer Space in Film Blogathon, being hosted by Debra at Moon in Gemini from Apr. 13-15, 2018. Click on the above banner to read bloggers’ take on space-based cinema, factual and fictional!

The wonderful thing about the magnificent sci-fi film The Day the Earth Stood Still is that it’s about so much more than it’s about.

On the surface, it’s about Klaatu (Michael Rennie), a visitor from a planet a few million miles away, who comes to warn of the Earth’s potential destruction if its inhabitants do not give up their aggressive ways.

It’s a simple enough message, but right from the start, poor Klaatu can’t catch a break. He tries to give a peace present to nearby soldiers, who respond by shooting him. He tries to tell the President’s rep to arrange a meeting between all world leaders, but the leaders won’t agree to such a meeting unless it’s on their home turf. Then he tries to move among the citizens to learn their ways and gets sold down the river by a macho guy who wants to impress his girlfriend (Patricia Neal), who ends up siding with Klaatu.

What the movie is really about is fear of strangers. It was, after all, made at the beginning of the Korean War conflict and during HUAC hearings, both of which were intended to root out “reds” or “pinks” (i.e., people who don’t think like us). And whenever Klaatu tries to speak of his belief in non-aggression, he gets shot down, figuratively or literally. The movie’s message is more timely than ever: Why are we so afraid of peace, anyway?

Michael Rennie was a British actor, unknown in the U.S. at the time of filming. He was chosen so that, instead of seeing a famous movie star come out of a spaceship, you’d see a believable alien. Rennie, Neal, and everyone else in this fine movie pull off the acid test: Sci-fi motifs and dialogue that could have been laughable in other hands (watch Plan 9 from Outer Space if you’re ever looking for a hoot) are completely plausible here.

Kudos are also due to Leo Tover’s glistening cinematography and Bernard Herrmann’s eerie score, both of which contribute considerably to the movie’s heightened atmosphere. Don’t watch this one alone, or in a paranoid state.