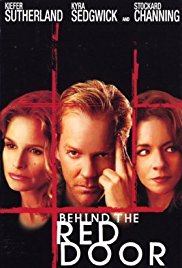 It concerns Natalie Haddad (Kyra Sedgwick), a photographer whose friend (Stockard Channing) tricks her into a free-lance assignment. Natalie, too late, finds out that the job is to photograph her long-estranged, gay brother Roy (Kiefer Sutherland).

The movie’s plot sets up a number of hurdles for itself. For one, Roy is succumbing to the final stages of AIDS. Natalie, a bitter loner, must make peace with both Ray and her dysfunctional family’s past, shown through black-and-white flashbacks of her mother’s murder.

The past credits of the movie’s co-writer and director, Matia Karrell, are not promising; they include scripts for the schmaltzy sitcom “The Wonder Years.” But evidently, Karrell’s own past — the movie is dedicated to her late brother, also named Roy — inspired her to take a great leap forward in quality.

Behind the Red Door pulls no punches in terms of its subject matter. Yet the movie, refreshingly, skirts every possible cliche presented by the movie’s familiar situation.

Sedgwick and Sutherland begin with familiar, almost conventional characters and whittle them down to their basic truths. Both deliver career-worthy performances.

And director Karrell never milks any situation for tears. Each scene lasts long enough to make its subtle point, and then the movie builds to a very low-key but moving conclusion.

TV-movies have come a long way from their origins as 90-minute time-fillers. Behind the Red Door is more satisfying than most theatrical releases of its year.