Like everyone else, I have some definite opinions regarding the ever-raging debate on U.S. gun control. But I’m not about to share them here, because this is not a political blog and I don’t want to get into a Phil Donahue-like discussion where nobody ever wins.

Instead, I only want to reflect on how this gun debate has made me long for a time when America was just plain less mean. Yes, I know I’m venturing into Old Fogey-Land, but please hear me out.

Two days ago, Feb. 23, was the 53rd anniversary of the death of a wonderful comedian, Stan Laurel. Did you know that he kept his name in the public phone book?

Laurel lived out his last few years in Santa Monica, CA, and his name, address, and phone number were printed in Santa Monica’s White Pages. He felt that any fan who wanted to talk to him or meet him had a right to do so. Many famous people, including Dick Van Dyke and Peter Sellers, met Laurel for the first time in this way. But Laurel was quite willing to meet non-celebrities as well.

People would phone Laurel to speak to him, and he would often invite these people to his apartment to regale them with stories related to his life and career. At these times, Laurel’s wife Ida (pronounced “EE-da”) would retire to another room, as she realized that this was Laurel’s way of entertaining people since he no longer made movies.

My point is this: What celebrity would dare to have their public phone number known these days? (I don’t even think there were any other in Laurel’s era who did it.) And these days, it’s not at all a stretch to imagine some crazed fan holding a gun on Laurel and taking him and his wife hostage. 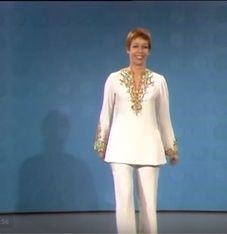 Or take “The Carol Burnett Show.” Burnett began nearly every episode of her TV variety show by “bumping up the lights” and taking questions from the audience. Sometimes, she even did more than simply answer questions. One elderly audience member asked Burnett where the restroom was, and (probably for a laugh) Burnett ushered the lady up to the stage and pointed out exactly which direction she should go to find it. On another occasion, an audience member asked for an opportunity to sing. The man was invited on stage and, accompanied by Burnett’s in-house orchestra, the man proceeded to belt out “What I Did for Love,” from the musical A Chorus Line.

(Of course, the most famous recipient of Burnett’s generosity to fans is Vicki Lawrence, who first met Burnett after writing her a letter stating how the two of them looked alike. As it happened, Burnett was looking for an actress to play her younger sister on a recurring sketch of her then-new variety show. The rest is TV history.)

Of course, TV variety shows are now dead, but if they weren’t, again imagine a celebrity inviting an unknown audience member up on stage. And imagine if said fan had a loaded pistol and an agenda. (The opening scene of the 2004 black-comedy remake of The Stepford Wives tried to play just such a scenario for dark humor.)

I’m hardly the first person to note that, when President John F. Kennedy was assassinated in 1963, a bit of America’s innocence died as well. And like a glacier suffering from climate change, shards of that innocence have been dropping off piece by piece ever since.

4 responses to “The smoking gun”