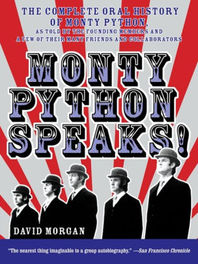 Monty Python member Michael Palin says, “I think there’s a danger in Pythons analyzing their own work. I think we shouldn’t do it.” Unfortunately for him, he and the other Pythons spend 315 pages doing just that in the delightful Monty Python Speaks.

For the uninitiated, here’s a quick history. Monty Python is the collective name for a group of five Britons — Graham Chapman, John Cleese, Eric Idle, Terry Jones, Michael Palin — and a transplanted American, Terry Gilliam. They are responsible for 45 of the funniest half-hours ever broadcast on television (in Britain beginning in 1969, America in 1974) and some equally inventive movies. Chapman died of cancer on the very eve of the group’s twentieth anniversary — “Worst case of party-pooping I’ve ever seen,” said Terry Jones.
For Python fanatics (I count myself among them), the new book is akin to the Holy Grail that the group sought in their infamous 1975 movie. The surviving group members and many of their associates are interviewed by David Morgan, and as befits their comedic style, the Pythons are quite open and frank about the group’s highs and lows. Among the many illuminated topics and tidbits are:

* Graham Chapman’s alcoholism, about which he was quite open himself. (While filming one of their movies, Michael Palin came across a half-empty bottle of gin belonging to Chapman. Palin had seen the bottle completely full earlier in the day.)

* Their first American TV appearance. It was on a 1972 “Tonight Show,” where guest host Joey Bishop introduced them with the immortal line, “This is a comedy group from England. I hear they’re supposed to be funny.”

* Python didn’t have a chance in America until a PBS station manager in Texas–“Dallas, of all places,” says Cleese — took a chance on them. Friends of the station manager were afraid his station would get burned down.

* Their then-manager absconded with the funds from their 1980 appearance at the Hollywood Bowl. They made no money from the gig until they released their 1982 movie of the concert.

* When ABC-TV brutally edited three of their TV episodes for a 1975 special, the Pythons sued the network, on the grounds that they’d rather make less money than have someone else censoring their work.

The ABC incident points up two concrete truths about Python:

(1) Like them or not, their particular world view is uncompromised, and their fans appreciate their honesty.

(2) Said view shouldn’t be left in the hands of people who just plain don’t understand them. The people who would “sanitize” it are the same kind of people that Python’s comedy satirizes.

But maybe I romanticize Python only because I grew up with it. I completely don’t get the followings for later work such as “South Park,” but I can still recite reams of Python dialogue. For others with similar bents, the book is must reading.