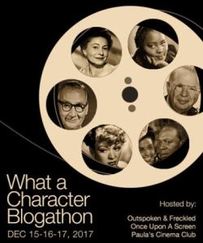 The following is my entry in the What a Character! 2017 blogathon, being co-hosted Dec. 15-17, 2017 at the blogs Outspoken & Freckled, Once Upon a Screen, and Paula’s Cinema Club. Click on the above banner, and read bloggers’ takes on some of their favorite character actors!

My chosen actor for this blogathon is Bruce Altman, but I’m afraid that my entry is going to be very brief, because even in the vastness of the Internet, there is very little information about him other than his voluminous TV and movie credits. If you’re really interested in him, probably the best source of info on Altman is this, an article summarizing a talk he gave to aspiring actors at the New York Film Academy. (One would guess that the reason for the scarcity of information about Altman is that that’s the way he wants it, and more power to him.)

Altman is one of those actors whom most people probably wouldn’t recognize by name, but as soon as they see him on-screen, they say, “Yeah, I’ve seen that guy before.” He graduated from the Yale School of Drama, began acting in off-off-Broadway shows in the 1980’s and has since gone on to a pretty rich career in television and cinema. Click here to see Wikipedia’s summary of the many series and movies in which he has appeared.

At his NYFA talk, Altman stated his philosophy as, “Never think you know what someone else is thinking.” He was referring to actors trying to second-guess the motives of casting directors and the like, but it’s obvious that Altman has also applied this philosophy to his own acting. In his best work, his acting consists of simply reacting. That doesn’t seem like much, but any straight man in a comedy act will tell you how important it is to have one guy who simply listens and doesn’t try to hog the stage for himself.

Below, I have embedded two clips of Altman’s appearances in movies that are very different in tone (and in time — look at the dates on these movies, and you’ll see how far Altman’s acting career has taken him). In Glengarry Glen Ross (1992), he plays a very disinterested customer trying his best to indulge an overzealous salesman (Jack Lemmon). In Matchstick Men (2003), he plays a low-key psychiatrist gently prodding a reluctant, tic-ridden patient (Nicholas Cage) for information about his past. Savor the work of this very fine supporting actor!