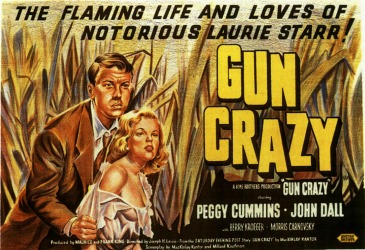 I enjoy hearing stories about how people met their spouses. It gives me a little insight into both the couple and the person who’s telling the story.

But I’m getting a little ahead of myself. The movie begins with flashbacks of the young Bart, showing how interested he is in guns. He doesn’t want to kill anyone or anything with them. At the risk of sounding Freudian, in Bart’s view, a gun seems to be a piece of security in life — which Bart could certainly use, having been raised only by his sister.

Bart pays a price to society for his gun obsession and is then set free. On his first day of freedom, Bart and his old friends go to town to attend a carnival, where Bart sees Laurie performing as a sharpshooter. Sparks (and bullets) fly quickly between the two.

Through the usual film-noir machinations, Laurie is eventually as free and beholden to no one as Bart is. So she decides to make Bart beholden to her. She figures that, with their joint expertise with guns, they can get whatever they want in life. At first, Bart hesitates at getting that down-and-dirty, but when Laurie threatens to leave him, Bart caves.

From there, an ever-spiralling series of circumstances make it doubtful that Bart and Laurie will make it to their first wedding anniversary.

Even by noir standards, this is one of the most pervasive weird movies I’ve ever seen — and one of the most riveting. Its most fascinating aspect is how the movie’s POV nonchalantly observes this in-over-the-head couple going on an increasingly violent robbing and shooting spree. Cinema’s Production Code guaranteed that the couple would pay for their actions in the end — but that doesn’t mean that viewers don’t get some titillating and voyeuristic thrills along the way.

John Dall is strangely touching as Bart, depicting how Bart’s pacifism slowly gets swept away by this woman who’s giving him the romance he thought he’d never have (in more ways than one). And Peggy Cummins long ago entered film-noir history as the ultimate manipulative dame. She offers us Laurie at face value, with no reasons or apologies for her grubby, grabby behavior — and just like Bart, we get swept up in her quiet fury.

I’ve never owned a gun or even fired one, for the same reason that many people give: I fear that it would be too easy to give into its temptation as an easy answer to an otherwise low-key conflict. Gun Crazy takes that premise to its ultimate extension. If only Bart had been more obsessed with marbles or coin-collecting when he was young…