The following is my entry in The Third Annual Buster Keaton Blogathon, being hosted by the lovely Lea at her blog Silent-ology from Feb. 19-21, 2017. Click on the above banner, and read bloggers’ tributes to the movies, TV work, and life of this silent-film comedy legend!

Film blogger Jim Emerson once wrote that he could see “the end of cinema” – that is, a time down the road when he was entirely sick of going to the movies, having seen it all already. Emerson asked his readers, “Has there been a movie, or a development in movies, that made you feel like saying ‘That’s it! I’m done!’? Where would you draw the line?”

On at least some days, I would draw the line at May 20, 1928. That was the release date of Steamboat Bill, Jr., the final independently produced film of Buster Keaton.

Cinema has continued to thrive since that particular date, of course. But the essence of much of the reason I ever wanted to go to the movies stops right there.

I used to follow movie comedy religiously. But frankly, for the past couple of decades, the coming-attractions trailers have been enough to turn me off. Modern comedies seem interchangeable – the same geeky guys getting into over-their-head situations, either eager to get laid (American Pie) or wishing they hadn’t (Knocked Up), or dealing with situations that any double-digitted IQ would have avoided from the start (What Happens in Vegas, The Hangover).

And finally, there are the guys who seem to aspire to the old school, bringing a reliable persona to film after film. Except that the personas consist mostly of mugging it up (Jim Carrey) or dealing heavily in bodily functions (Adam Sandler).

When I look at all these guys, I just want to shake my head and tell them, “Buster Keaton. You lose.”

What is there to see in modern film comedy that I haven’t seen in Keaton’s best work?

Jim Carrey expects kudos for a bungee jump in Yes Man? Big deal. Try having a real-life two-ton wall fall down all around you, as Keaton did in Steamboat Bill, Jr.

Eddie Murphy or Mike Myers doing multiple roles? Buster Keaton did nine perfectly timed versions of himself on-screen all at once, along with several other roles, in The Playhouse.

Computer-generated special effects? Feh. Watch Keaton literally throw himself into a movie-within-a-movie in Sherlock Jr. (Woody Allen swears this movie wasn’t the inspiration for his own The Purple Rose of Cairo, in which a screen character leaves his movie and enters “real life.” Yeah, right.) 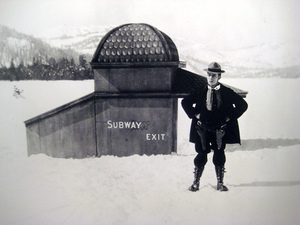 Emerson mentions that the late, great movie-bio author William K. Everson (“Who’s that?”, I hear the teenagers saying) had little interest in movies made past the early 1950’s, preferring to stick to the movie world he knew. Like a 21st-century Everson, I find little reason these days to venture beyond my PC, where I can toss in a DVD of Our Hospitality and watch a put-upon but stoic, almost epic comedian nearly kill himself, literally, for his laughs.

11 responses to “For the love of Buster Keaton”