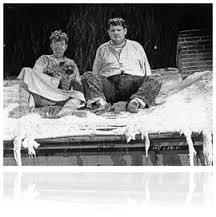 It’s pretty obvious that Stan Laurel couldn’t get enough of Laurel & Hardy with animals. Laughing Gravy is obviously Angora Love with a dog instead of a goat, right down to the scene where Stan and Ollie try to fool the landlord about who’s really getting a bath. (The motif would be re-worked yet one more time, in the second half of The Chimp.)

That said, the old routine still runs pretty successfully, especially when depicting the most unrelenting blizzard this side of Below Zero. Most of this stuff, while an obvious re-working of an old routine, still inspires laughs.

The real mystery of this film is a shot-but-unreleased ending, discovered in 1985 and inserted into DVD versions of the film. (You can see the scene at the 19-minute mark; the movie is embedded below.)

In the midst of all of the chaos about the unwanted animal, Stan receives a letter from a rich uncle that states he’ll receive a handsome check if he’ll just ditch Ollie. The scene is completely bizarre. It has nothing to do with the contretemps that preceded it, and it fails miserably as a parody of any you-go-your-way-I’ll-go-mine scenes of films about loner heroes. So whatever made Laurel think it would work in the first place?? That’s a stranger mystery than how Stan and Ollie think they’ll hide the dog from the landlord.