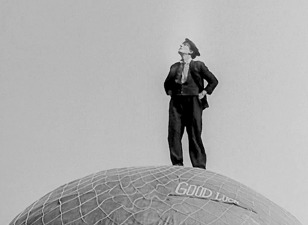 As Buster Keaton’s penultimate short subject for his own studio, The Balloonatic — more even than The High Sign or many shorts that Keaton demeaned — seems more “gaggy” than most of his shorts.

The story begins with Buster happening into a carnival’s Tunnel of Love ride into which he rides a boat with a total stranger (Phyllis Haver). The movie doesn’t show Buster trying to put moves on the woman, but we guess what has transpired when the boat emerges: the woman is tight-lipped and smug, and Buster sports an upturned hat and a black eye.

Later, Buster happens on to a hot-air balloon that is about to be launched. Buster wants to be involved, so he is given a banner to hang from the top of the balloon. The balloon is launched before Buster has a chance to dismount, and the balloon takes him to a secluded area of forest, where he runs into the same girl, who is camping in the wilderness.

As always, the set-up yields its fair share of funny gags. The problem with most of the gags is that most of them don’t seem individually “Buster.” Keaton’s best comedy results from his persona’s personal reaction to the crazy world around him. But there’s not a whole lot of material in The Balloonatic that any anonymous comedian couldn’t do. (One example is when Buster paddles a canoe and then “walks” it to shore via a hole in the canoe where he has placed his feet, rather like “The Flintstones'” primitive automobile.)

Another problem is the obvious fakery of some of the gags. Keaton often expressed the view that if a gag looked as though it was faked, it was better off not being done at all. There is one scene with Buster and a real-looking, menacing bear that is quite startling in its lack of fakery. On the other hand, when Buster is atop the floating balloon or is about to ride his canoe over a deadly waterfall, the editing makes it perfectly obvious that Keaton is not in any real danger. That sounds sadistic, I know, and I wouldn’t have wished upon Keaton any more physical peril than he himself wrought. It’s just that, from the beginning, Keaton set the bar so high for such authenticity that when he really does fake something, the viewer feels let down.

One would like to attribute this situation-comedy ordinariness to the fact that Keaton was winding up his short-subject work. But his final independent short, The Love Nest, is as inventive and physically perilous as anything he ever did. In the career of most other comics, The Balloonatic would probably be a high point; coming from Keaton, it seems decidedly earthbound.