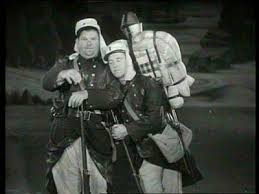 There’s almost no reason Beau Hunks should be as funny as it is. It’s four reels long (twice as long as the standard Laurel & Hardy short), a length L&H never attempted again until the initial version of A Chump at Oxford (1940). Yet somehow, the pacing is perfect — slightly more leisurely than the usual L&H, but never so slow that it’s boring.

In fact, the whole movie is pretty nonchalant. It begins with Ollie pining over a girl he plans to marry (the photo is of starlet Jean Harlow, who was memorably undressed by Stan and Ollie in Double Whoopee), only to have Ollie receive a “Dear John” telegram from her. Ollie decides to join the Foreign Legion, and he’s such a glutton for punishment that he drags Stan along with him.

Once in the Legion, they’re subjected to the florid verbosity of their commandant (Charles Middleton, who reprised the role in L&H’s The Flying Deuces, which mostly elaborates on the subject matter of this movie). And L&H keep supplying surprisingly funny routines like a magician pulling a rabbit from a hat. (My favorite bit is Ollie’s casual face as he blithely conquers the enemy at movie’s end.)

Considering the fits and starts of their later military comedy Bonnie Scotland, it’s almost an aberrance of nature that Beau Hunks is so funny. Maybe it’s because, unlike the lovesick hero of Scotland, the only romantic interest in the movie is a still photo of Jean Harlow — referred to as “Jeannie Weenie” by Ollie, and who turns out to have been far more popular than Ollie ever envisioned.