The following is my contribution to The Mel Brooks Blogathon, being hosted by The Cinematic Frontier from June 28-30, 2016. Click on the above banner, and read bloggers’ critiques of movies directed by the famous funnyman!

Just about the time you roll your eyes at the hopelessness of the gags in Mel Brooks’s Silent Movie, a real gem comes along. As when a poster of Bernadette Peters in bosomy vamp mode is revealed, and some men seated at a table make the table rise without touching it. Or the gigantic prop fly that lands smack in the middle of Henny Youngman’s soup, inspiring the greatest one-liner in the history of silent movies.

Of course, the fact that Mel Brooks co-wrote, directed, and stars in this silent-film spoof is enough to tell you whether you’ll enjoy it or not. Surprisingly, this ramshackle farce has its basis in autobiography. At the time of this movie, Mel Brooks had just come off his Blazing Saddles/Young Frankenstein doubleheader, and 20th Century-Fox would probably have let Brooks film a spoof of the Yellow Pages at that point.

Thus comes the storyline of Mel Funn (Brooks), a washed-up movie director who comes up with the brilliant idea of making a silent movie. The studio director (Sid Caesar, who might have done better in Brooks’s role) agrees to the film as long as Funn can provide the appropriate big-name stars as box-office insurance. It doesn’t help that Funn’s studio is being threatened by the conglomerate of Engulf and Devour, and the studio needs a hit to make it back into the black.

Surprisingly enough, the big-name cameos provide some of the movie’s biggest laughs. Burt Reynolds takes a narcissistic shower and finds himself growing extra hands. Paul Newman pokes fun at his offscreen racing hobby by zooming around in a wheelchair. And famed mime Marcel Marceau finds his voice in the movie’s only line of dialogue. 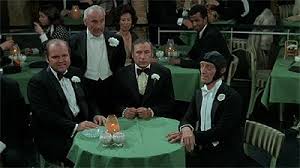 On the other hand, Marty Feldman and Dom DeLuise, who would seem an obvious choice as Mel’s crazy cronies, are a little joke that gets stretched a long way. Yet even when the movie isn’t as hysterical as it thinks it is, it causes you to smile throughout and to wish silent film was still a viable alternative for physical comedians, instead of an occasional novelty put to use by a hit filmmaker who could make any movie he wanted.