The following is my entry in The Classic Quote Blogathon, hosted by The Flapper Dame on Mar. 4-6, 2016. Click on the above banner, and read bloggers’ backstories of some of the most famous quotes in movie history! 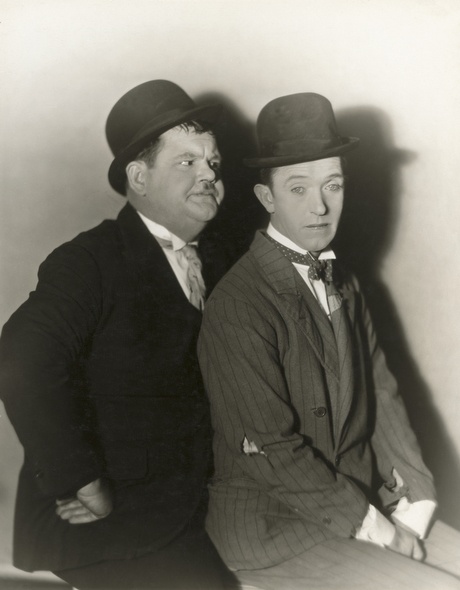 I would hazard a guess that, even for non-fans of Laurel & Hardy, there are two indelible images of Stan and Ollie that everyone seems to know about or remember. One is of the duo endlessly hauling a crated piano up a Sisyphean flight of stairs in The Music Box.

The other is of Ollie turning to Stan, usually after some Stan-created disaster, and intoning, “Well, here’s another nice mess you’ve gotten me into.” A funny and most durable catchphrase — but where did it come from?

Laurel & Hardy biographer Randy Skretvedt believes the line might have been provided by L&H title-writer H.M. “Beanie” Walker (above), who might have unconsciously cribbed it from Gilbert & Sullivan,  who used the line in both The Mikado from 1885 and The Grand Duke from 1896.

The catchphrase was first used by Hardy in The Laurel-Hardy Murder Case (1930). In popular culture, the catchphrase is often misquoted as “Well, here’s another fine mess you’ve gotten me into.” This misquoted version of the phrase was never uttered by Hardy in a movie. Ironically, L&H seem to have caused the misunderstanding themselves, having named another of their 1930 short subjects Another Fine Mess.

If you’re a hard-core Laurel & Hardy buff (here, sir!), you might have wondered how many times this catchphrase has showed up in a L&H film. One enterprising website has documented the answer — indicating that the catchphrase (including its minor variations mentioned above) was used a total of 16 times. In two instances, it showed up twice in the same film, and it is even the very last line of dialogue ever spoken by Laurel & Hardy in a theatrical movie (in their final release, 1951’s infamous Utopia). 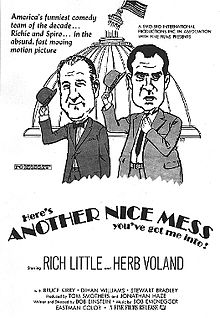 Unlike Laurel & Hardy themselves, another set of filmmakers did use the catchphrase correctly as a title, but to little avail. In 1972 came a little-seen movie comedy titled Another Nice Mess. It was produced by Tom Smothers of the Smothers Brothers, and it was written and directed by Bob Einstein (later to gain fame as stunt man “Super Dave Osborne” on cable TV). Intended as a political satire, it starred impressionist Rich Little and character actor Herb Voland playing President Richard Nixon and Vice President Spiro Agnew in the manner of Laurel and Hardy. Apparently, the movie had only a brief run in a few Los Angeles theaters and was never released nationally.

In 2005, a jury of over 1,500 leaders from the creative community, including film artists, critics, and historians, chose what they felt were cinema’s 100 most memorable quotes for the American Film Institute’s “100 Years…100 Movie Quotes” list. Ollie’s “Another nice mess” quote ranked at # 60.

The phrase continues to be relevant in the age of blogging. A little over a year ago, a blogger — who had recommended the use of an older Microsoft handset whose email app later became obsolete — used Ollie’s catchphrase as the headline for his blog on how he would help users restore their email system. And just three weeks ago, a blogger for LinkedIn.com felt compelled to hurl Ollie’s invective at “interventionist economists” such as Alan Greenspan.

Right up to the end of his life, Stan Laurel poo-poo’d the idea that his movies had any claims to either social commentary or immortality. One would imagine how floored he’d be that just one simple sentence from his movies has taken on such a life of its own.

7 responses to ““Here’s another nice mess you’ve gotten me into.” – Oliver Hardy”