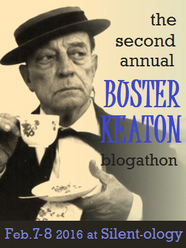 The following is my entry in The Second Annual Buster Keaton Blogathon, hosted by the lovely Lea at Silent-ology from Feb. 7-8, 2016. Click on the above banner, and read a variety of blogs related to the movies, TV work, and life of the wonderful comic artist Buster Keaton! 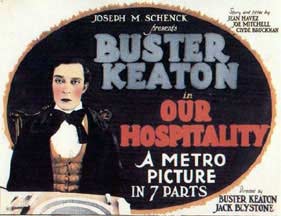 Our Hospitality represents a quantum leap forward for Buster Keaton’s filmmaking. By this point, we’ve grown so accustomed to laughing at Keaton the moment he appears on-screen that when his first few scenes are developed at a leisurely pace, we start to wonder if Keaton will reward our patience. All I can say is: Wait for it.

The story is a take-off on the famous Hatfield-McCoy family feud, here set a few decades back from when it actually happened. Otherwise, the movie is very authentic-feeling. Keaton created his setting based on period photos, had his art director Fred Gabourie make a reproduction of an early, rickety steam locomotive (trains were Keaton’s passion), and also rode on a period-style bicycle. All of this contributes to the movie’s atmosphere, as well as providing the impetus for some inspired gags.

(Credit for the movie’s direction is given to both Keaton and John G. Blystone, who later got directing credit for Laurel & Hardy’s Swiss Miss and Block-Heads. Since Stan Laurel didn’t take any direction on his own movies any more than Buster Keaton did, it’s not to difficult to guess who the auteur is here.)

The movie begins with a startlingly dramatic prologue showing the on-going feud between the Hatfields and the McCays. When the McCays’ father and a Hatfield brother are killed, Joseph Canfield (Joe Roberts, in his final role before his death a few months after the movie’s release) vows vengeance on the next male McCay, who at present is an infant named John (played by Buster’s son).

Mrs. McCay sends her son to an aunt in New York for safety’s sake, but twenty years later, John (Keaton) returns to handle his late mother’s estate. John is so courtly to Virginia (Natalie Talmadge, then Mrs. Buster Keaton), who rides with him on the train home, that she invites him to her house for dinner. Unfortunately, he discovers too late that she is a Hatfield and that her brothers have blood lust on the brain. The Canfields’ code of honor does not permit them to kill any guest in their house; needless to say, John does everything he can to prolong his stay inside. 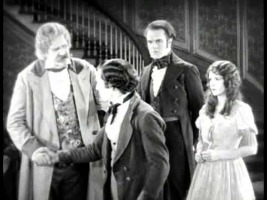 The movie’s final third is nothing less than breathtaking, as the Canfields pursue John to a tall gorge over a river that leads to a waterfall. When Virginia tries to help John and is nearly swept over the waterfall, John’s rescue of her inspires one of the most stunning shots in Keaton’s filmography (there would be plenty more to come). As always, Keaton had a Canfield-like sense of honor and could not allow himself to fake any stunt he thought he could do; in the shot of Virginia’s rescue, Keaton inhaled so much water that a doctor had to be called to give him first aid.

(It was not Keaton’s only death-defying stunt in the movie. When he first fell into the water, Keaton had been attached to a safety wire, but the wire quickly snapped. Thus, much of Keaton’s peril in trying to save himself wasn’t acting.)

Nevertheless, there are also plenty of laughs in the movie, especially in John and Virginia’s train ride and in John’s machinations to keep from leaving the Canfield home after dinner. Natalie Talmadge, despite her having been regarded as the least thespian of the famous Talmadge sisters (she would never do another movie role), acquits herself admirably as the lone Canfield concerned for John’s life.

Any modern movie that combined such period detail, risible comedy, and eye-popping suspense would probably be regarded as a masterpiece. Come to think of it, there’s little reason not to regard Our Hospitality in the same way.