The following is my entry in my A Movie Gift to You Blogathon, being hosted at this blog from Dec. 18-20,2015. Click on the above image, and read bloggers’ entries about special movies that they would “gift” to some very specific and deserving persons!

Ah, to be you, the lucky person who has never before seen a motion picture. You’re about to experience a new world of sensation. You’ll be amazed at how easily you get caught up in stories of people you don’t know, flickering anonymously on a big screen. And yet, if those stories are told well, you’ll relate to them as intuitively as if a good friend or relative was sitting next to you and telling the entire thing.

For your very first movie to view, it’s only appropriate that you watch a movie whose topic is the power of movies. Many such movies have been made since the beginning of cinema itself. But for your special gift, I choose the Italian-French co-production Cinema Paradiso, because for me, it’s a movie that’s a compendium of all the reasons why I love movies.

The story concerns Salvatore, a young boy in the small town of Giancaldo in post-World War II Italy. Salvatore’s father was killed in the war, leaving his mother without her bearings to raise Salvatore and his younger sister. So Salvatore gets lost in the rotating roster of movies being shown at the theater from which the movie gets its title. This causes Salvatore to strike up a friendship with Alfredo (a winning performance by Phillipe Noiret), the theater’s projectionist, who refers to Salvatore affectionately as “Toto,” takes Toto under his wing, and shows him how to be a projectionist.

The movie beautifully details the different effect that films have on different viewers. Toto, of course, is starry-eyed and loves them. Alfredo lives a hermetic life in the projectionist’s booth and says that he often finds himself talking back to the on-screen actors for no good reason. But the most affected local citizen is the town’s priest, who also serves as the local movie censor. Alfredo dutifully sneak-previews every new movie for the priest, and when the movie comes to an offensive passage — good heavens, a kiss! — the priest rings a bell, signalling Alfredo that the offending shot must be edited from the movie prior to public viewing. (You can imagine the effect that such editing has on the local citizenry.)

I haven’t yet mentioned the actor who plays Toto. That’s because there are actually three of them, and each in his own way is excellent. Salvatore Cascio plays the youngest version of Toto, and charmingly so — you couldn’t ask for a more affectation-free performance. As Toto the teenager, Marco Leonardi captures the operatic passion you’d expect of an Italian boy coming of age; when Toto falls for a local girl, it is only the greatest love ever seen in Giancaldo. Finally, there is the successful but world-weary Salvatore, captured nicely by Jacques Perrin.

This movie has a lot to say about film as a societal shaping force, but it does so without hitting you over the head with it. At one point, Alfredo declares, “Life isn’t like the movies.” Yet whenever Alfredo offers a sage-sounding piece of advice to Toto, it turns out to be a quote from some old movie Alfredo has seen. The movie also offers bittersweet commentary about the transitory nature of life, showing as it does three stages in the life of a movie-struck kid. 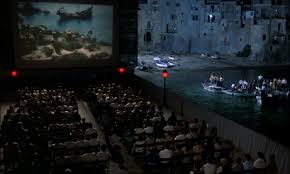