The following is my second of two entries in the Swashathon!, being hosted by the blog Movies Silently from Nov. 7-9, 2015. Click on the above banner, and read blog entries about a wide variety of swashbuckling adventures throughout the history of movies!

Legendary Warner Bros. cartoon director Chuck Jones said that Bugs Bunny is who he wished he could be, but Daffy Duck was more like he really was. The Scarlet Pumpernickel (an obvious play on the original hero-with-a-secret-identity, The Scarlet Pimpernel) is Daffy doing his heroic best — not quite making the grade, but soldiering on nevertheless. The schlump-in-a-hero-costume bit worked so well that Jones let Daffy similarly demolish other genres in the hysterical cartoons Drip-Along Daffy (Western, 1951) and Duck Dodgers in the 24th-1/2 Century (science fiction, 1953).

The story begins with a long tracking shot through a movie lot (presumably Warner Bros.). We hear both the strains of the song “Hooray for Hollywood” and the voice of someone shrieking about being murdered. The camera finally settles on Daffy, complaining to his studio boss “J.L.” (an obvious potshot at WB boss Jack L. Warner, whom Jones claims never realized he was being satirized in the cartoon). 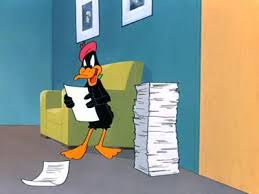 Daffy loudly gripes about being typecast in nutty comedies and begs J.L. for a dramatic role. Before J.L. can stammer out a refusal, Daffy hauls out a self-written script (nearly as tall as he is) and begins proudly reading “The Scarlet Pumpernickel, by Daffy Dumas Duck.” Daffy intones, “‘Chapter 1, Once upon a time’ – Great opening, huh?” (Yes, for a book!)

From there, the cartoon segues into the story proper (if that’s the word for it) about the titular hero, a crafty British highwayman whose deftness defies any threat of capture by the gang of the Lord High Chamberlain (Porky Pig!). The Lord plots to marry off his daughter, the fair maiden Melissa, to the evil Grand Duke (Sylvester the Cat), in order to draw out The Scarlet Pumpernickel, and then…

Well, you can pretty well figure out where the plot is going from here. What you’re probably asking yourself is, how did Porky Pig and Sylvester come to be threatening figures in a macho swashbuckler? The answer is that Chuck Jones decided that if he was going to make an all-out epic, he ought to use every character he could from the Looney Tunes repertory company. (The all-star cast, above, clockwise from left: Porky Pig, Elmer Fudd, Sylvester, Daffy, Henery Hawk, Mama Bear from Jones’ Three Bears “trilogy,” and the fair maiden Melissa.)

I hate to even give away the rest of the delicious (parody-)plot. Suffice to say, Jones and his story writer Michael Maltese have great fun with the swashbuckling genre in general. The cartoon is filled with lovely, mock-dramatic high-angle and shadowy shots, outright references to Errol Flynn (although Flynn played Robin Hood, not the Pimpernel) and, in at least one case, a direct “quote” from one of the Zorro movies.

My only warning about this otherwise wonderful cartoon is that it has quite the unhappy ending. I mean, for crying out loud, it’s definitely the only swashbuckler movie that has the nerve to end with its village-setting suffering from a recession!

(Sadly, I cannot get the cartoon to post on my blog, but you can click here to view it for free online. Also, if you’ve enjoyed this entry, please click here to read my first Swashathon! entry about Douglas Fairbanks Sr. in The Mark of Zorro.)