The following is my entry in The William Wellman Blogathon, being hosted Sept. 10-13, 2015 by the blog Now Voyaging. Click on the above banner, and read the many blog entries devoted to the movies and life of this legendary film director! 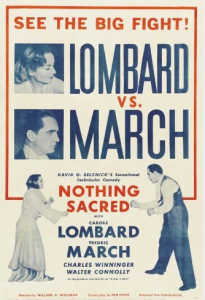 “For good, clean fun, there’s nothing like a wake.”

Wally Cook (played by Fredric March) succinctly provides the theme (epitaph?) of the screwball comedy of which he is the focal point, Nothing Sacred. The movie perfectly demonstrates how America can’t resist losing its heart to someone on the verge of death — as long as that person is female, attractive, and vulnerable. In short, as long as she resembles Carole Lombard.

The movie is flawlessly titled as well. Within its first ten minutes, Ben Hecht’s screenplay shows that any subject is up for satirical grabs, whether it’s:

The movie’s story is that once-proud reporter Wally Cook, having been relegated to his newspaper’s obituary section, sees an opportunity for redemption in the story of a small-town girl who has been diagnosed with radium poisoning. Cook pleads and gets a second chance from his editor, the fatefully named Oliver Stone (Walter Connolly), and flies off to Warsaw, Vermont, to interview the girl, Hazel Flagg (Carole Lombard).

As it happens, Hazel’s small-town medico, Dr. Downer (Charles Winninger), gives the game up early by freely admitting to Hazel that he misdiagnosed her while in a brief alcoholic stupor. Her worries were for nothing; Hazel is “fitter than a fiddle,” the doctor now declares. Hazel has mixed emotions about this diagnosis, as she had thought she might be flown to a big city to be further diagnosed by some major doctors. Hazel quickly puts the kibosh to any rustic fantasies of happy small-town life when she declares, “It’s kind of startling to be brought to life twice — and each time in Warsaw!”

Happily for Hazel, her big-city wishes are about to come true. Wally meets up with Hazel and Dr. Downer, who never quite get around to telling him Hazel’s true diagnosis before Wally declares that he’ll take Hazel to New York and make her the toast of the town before she kicks the bucket. All of a sudden, dying sounds pretty good, at least in theory.

At this point, I am loathe to give away much more of the plot, because it should be savored as heartily as the champagne that Hazel imbibes while receiving an over-the-top tribute at a New York nightclub (one of the movie’s many highlights). Suffice to say, I would go further in labeling this not just a screwball comedy, but a black screwball comedy, dealing as it does in themes of city-wide bamboozlement, cheap sentimentalization of death, and suicide.

The barb- and epigram-filled script is an utter delight, although it cannot be credited entirely to its credited writer Ben Hecht, who walked off the production after several disagreements with the movie’s producer, David O. Selznick. Uncredited contributions came from director William Wellman, as well as veteran scribes including Budd Schulberg, Ring Lardner Jr., Dorothy Parker, George S. Kaufman, and Moss Hart. If that sounds like an impromptu gathering of the Algonquin Round Table, that’s pretty much how the dialogue plays out — and that’s definitely no insult.

And the entire cast is delightful — from March, Lombard, Connolly, and Winninger, right down to character actor George Chandler as a wordless press photographer who pops up to take Flagg’s picture at inopportune moments. (Keep an eye out for Gone with the Wind’s Hattie McDaniel and The Wizard of Oz’s Margaret Hamilton in brief bits at the beginning, and frequent Marx Brothers villain Sig Ruman as a Viennese specialist who examines Hazel.)

Finally, if you’re a hard-core ‘30s film buff, you can practically make a drinking game out of each time the movie puts one over on the censors. Considering that this film was made well after the Production Code went into effect, the movie makes a surprising number of light-hearted references to God and Christendom. And you haven’t lived until you’ve seen the movie literally extend the middle finger to its 1937 audiences. (Carole Lombard must have put the censors under one hell of a spell.)