The following is my second and final contribution to my Beatles Film Blogathon, held July 5-7, 2015 to honor Ringo Starr’s 75th birthday and his recent induction into the Rock and Roll Hall of Fame. Click on the above banner, and read bloggers’ insights into Beatles-starring and Beatles-related movies and videos! 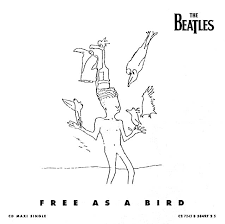 We sure love to knock our heroes down to size, don’t we?

Free As a Bird was the “teaser” single from the long-awaited Beatles Anthology 1. The “Three-tles” took two solo tracks done by John Lennon in 1979 — this one (which was incomplete before it was turned into a Beatles single) and Real Love — and added their vocal and music accompaniments to it. Though the Anthologies received rave reviews and shot up the charts despite little airplay, the Beatles Anthology singles were almost universally disdained. And as the title of one of their older songs declares, I wish someone would “tell me why.”

For 25 years, Beatles fans were clamoring for a reunion, even after a certain person with a handgun snuffed out John Lennon. Well, folks, this is as close as you’re likely to get to a Beatles reunion, and you could do a lot worse. The Beatles in 1995 sounded like most of their die-hard fans — a bit beaten down by life, but still willing to give it a chance. It might not be The Beatles’ greatest work, but given the depths to which they could sink as a quartet (try listening to the lesser numbers on the original Let It Be album some time), it’s hardly an embarrassment.

Like the song, its video — directed by Joe Pytka, best previously known for his Nike commercials pitting Bugs Bunny against Michael Jordan — is a visual delight, stuffed to the margins with references to The Beatles’ earlier work. Apple Corps claimed there are more than 80 such references in the video, but every time I try to count them, I get lost in the sheer spectacle of the thing. If you’re a hard-core Beatles buff, just sit back and enjoy it.