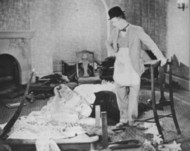 Who says Laurel & Hardy don’t have subtext? The gist of Our Wife is that Ollie is eloping with his fiancee (Babe London). Watch Stan’s face when Ollie reminds him that he’s the “best man.” It could well be the first time in his life that Stan was best anything.

Our Wife is amiable middle-level L&H — not a classic along the lines of The Music Box or Helpmates, but still a sure-fire laugh-getter. For me at least, the reason it’s denied classic status is the horrible cutaway shots to Ollie’s wedding cake being gradually ravaged by more and more flies. (Couldn’t somebody have put a glass cover over the blankety-blank thing?) Ollie eventually chastizes Stan for spraying bug spray on the cake to eradicate the flies, but by that time, we in the audience are gratified that somebody did something to relieve our nausea.

There’s also the movie’s middle section, where Stan, Ollie, and Ollie’s bride try to squeeze themselves into a getaway car that’s slightly larger than a Matchbox model. (Those who think Laurel had no directorial finesse should view the movie’s first shot of the car sitting quietly under a street light, followed by Ollie’s bride coming into the shot and towering over the car.) The scene is a bit drawn-out (which is more than one can say for the car), though it’s still a hoot. (The car was probably crowded as soon as Stan got into it — it never occurred to him that two plus-sized people might not fit into it easily??)

The final scene at the preacher’s office is a nice, near-freak ending. No physical distortions here, but there is the parson’s wife (Blanche Payson, who gave her all in a single still shot in Helpmates) punching a deserving Stan in the chin, and cross-eyed preacher Ben Turpin performing a most unusual wedding (at least for 1931). (Let’s put it this way — the conservatives in “red states” probably won’t enjoy the joke.)