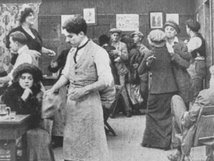 Chaplin plays a not-so-great cabaret waiter. During his break, Charlie fights off a man who is bothering a woman (Mabel Normand), and she gratefully invites Charlie to her home, where he announces himself as a Greek ambassador.

(Charlie’s business card helpfully explains: “O.T. Axle – Ambassador to Greece.” This posing-as-a-count/ambassador/officer routine got heavy mileage in silent comedies [see also Chaplin’s Mutual short The Count]; the closest thing I’ve seen to it in modern movies is the Count in the Coen Bros.’ Intolerable Cruelty [2003]. One wonders how often this ruse was tried in real life and if anyone outside of silent movies was ever fooled by it.)

Anyway, Mabel’s parents are impressed enough by the fake Count to invite him to Mabel’s garden party. Meanwhile, Mabel’s jealous lover (Harry McCoy) follows Charlie back to work to discover his true origins. After Charlie becomes the hit of the party before returning to work, the lover “casually” suggests to the other party guests that they go “slumming” at a local cabaret. Charlie briefly tries to keep up the Count ruse, but it’s all over once Mabel beats him unconscious.

As always, Chaplin’s sheer force of personality puts the silly “farce” element across, at least until the ending. We know perfectly well what’s going to happen; couldn’t Chaplin have pulled just one more trick out of his sleeve – maybe, him crossing paths with a real Count who helps him complete the ruse – just to relieve the finale of its predictability?