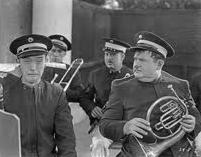 You’re Darn Tootin’ has been praised by L&H biographer Randy Skretvedt as showing that when Stan and Ollie are (literally and figuratively) stripped of everything else in this world, they still have each other. And if you want to view the movie in those lofty terms, you could say that it’s like watching the entire span of L&H’s friendship in twenty minutes. On top of that, it’s funny as all get-out.

If any scene proves that silent movies were never truly silent, it’s the opening of You’re Darn Tootin’, where Stan and Ollie perform in an orchestra and most definitely march to the beat of their own drum. As hilarious and chock-full of sight-gags as it is, the scene would be sorely diminished without proper musical accompaniment.

In any case, the scene humorously demonstrates why Stan and Ollie quickly lose their jobs after riling up their pompous conductor. Act II of the movie shows Stan and Ollie at their boarding house, where they do a dry run (well, not exactly dry) of the salt-and-pepper-shaker-lid routine that they later reprised in The Hoosegow. Suffice to say, Ollie gets a lot of seasoning in his soup, thanks to Stan. Then the landlady’s son tips off Mom that the boys were fired from their jobs, and the landlady orders them out. They leave in a melodramatic flourish, made considerably less dramatic by the fact that they have mistakenly have each other’s hats on.

Act III finds The Boys out in the street, trying to scrounge up a living with their band instruments and plying gags that would come off as smart-alecky if done by any other comedians. (Cop: “Do you have a license [to play the instruments]?” Ollie: “We have no dog.”) Ollie’s eventual venting of his frustrations results in Stan’s angrily throwing Ollie’s horn into the street, where one of those trucks that seemingly lies in wait for L&H rolls over the horn and squashes it flat. Ollie tips his hat over his forehead in a sign that Stan will be getting his (though of course, Ollie forgets who started the fracas in the first place).

Ollie and Stan have it out in a hitting, shin-kicking, pants-ripping melee that spreads like a fever to everyone who passes by. This is the sort of slapstick violence that is sniffed at by non-L&H buffs, but here it has certainly been built up accordingly, unlike Three Stooges shorts that start at this level and go straight to mayhem. In any case, the fever spreads even to an innocent victim who has only to walk nonchalantly in front of this crowd before being denuded himself.

Finally, a cop happens into the mess and Stan tears off his pants before realizing what he has done and running off with Ollie. An overweight, pantsless man cries, “I’ve been robbed!”, and the final shot shows the recipients of the robbery — Stan and Ollie, crammed into a single pair of pants, tipping their hats at the crowd in the hope of inconspicuously leaving the scene of the crime.

This movie was released in Britain as The Music Blasters. But their occupation here is of as little consequence as it is in the later Fox film The Dancing Masters. It is merely a catalyst to demonstrate that, as much as they might beat each other up, Stan and Ollie will still walk off into the sunset together — even if only in one pair of pants between them.