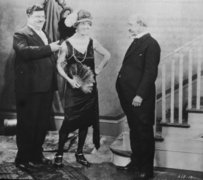 That’s My Wife is one of those films that truly puts Laurel & Hardy’s characterizations to the test. Decades of stale sitcoms have long worn thin the man-masquerading-as-a-woman-for-trite-reasons comedy cliche. Like the pie-in-the-face routine, the only thing that makes this ritual funny is not the fact that it’s happening, but its normally staid character’s reactions to it. On that basis, That’s My Wife holds up surprisingly well.

The premise is that Stan has lived on Ollie’s premises for so long that Mrs. Hardy (L&H vet Vivien Oakland) has had enough and moves out. Wouldn’t you know it, Ollie’s rich Uncle Bernal (William Courtwright) — who plans to leave Ollie his a huge inheritance if Ollie stays happily married — chooses that night to visit Ollie and meet Mrs. Hardy for the first time. Guess who gets commandeered to play Mrs. Hardy.

Again, it’s not the premise itself that’s so hilarious as how the familiar characters react to it. When the story sends Mr. and “Mrs.” Hardy to dinner with Uncle Bernal, the movie throws every cliche it can muster at The Boys — an obnoxious drunk, a necklace inadvertently dropped down the back of Stan’s dress — and L&H meet each challenge fully in character. When a restaurant customer opens a phone booth and catches Stan and Ollie in it, Ollie sheepishly emerges and provides (via intertitle) one of the all-time great Hardy lines: “Believe it or not, we were calling Philadelphia.”

As with all of the great L&H shorts, at movie’s end Stan and Ollie are left with nothing and no one but each other. As their concise characterizations here prove, that’s more than enough.