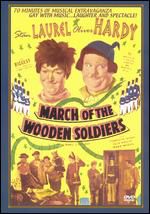 I will surely offend generations of grown-up kids by saying this, but March of the Wooden Soldiers isn’t all it’s cracked up to be. In his famous movie guide, Leonard Maltin says the movie “looks better all the time, compared to lumbering ‘family musicals’ of recent years.” But the movie caters exactly to that “lumbering family musical” crowd who seem to believe that entertainment should be inoffensive at the price of being entertaining.

The movie is not completely without its merits. The idea of a fairyland filled with storybook characters is charming (far more charming than the idea’s execution, unfortunately). Stan and Ollie’s byplay, as it is in even their lesser movies, always makes at least a few moments worth watching. (Stan’s pee-wee game is more fun and endearing than anything else in the movie.) And in the ever-florid category of L&H villains, none stand out more than Henry Brandon as Silas Barnaby, who has designs on Little Bo-Peep (Charlotte Henry) that still makes you shudder 80 years later.

But it’s all bogged down in that mire of family-film formula that works frantically to convince you how wonderful it is. The background music, usually a charming counterpoint to L&H’s tomfoolery, here comes off as merely over-insistent. Tom-Tom (Felix Knight), Little Bo-Peep’s love interest, is a high-pitched simp who hardly seems up to the elementary task of helping Bo-Peep find her lost sheep. And in an age where even the dazzling special effects of the first Star Wars movie already look quaint, it’s hard to imagine kiddies getting worked up at the thought of ostensibly scary bogeyman stumbling around the movie in stitched-together costumes.

Laurel & Hardy’s usual child-like adultness is made far too literal in this format, rather in the way that the clownish wackiness of The Marx Brothers was placed in a too-appropriate setting in At the Circus. The result is a family film that, to cop Leonard Maltin’s review of a different family film, might entertain children if you pay them to watch it.