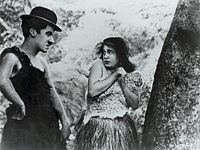 Based on his middling work here, the title His Prehistoric Past could just as easily refer to Chaplin’s herky-jerky Keystone era as it does to this, his final Keystone short.

The movie is set in the Stone Age. Chaplin plays a caveman named Weakchin who nevertheless resembles the familiar Charlie, with mustache and bowler hat. (Best gag in the film: Looking for something with which to light up his pipe, Weakchin picks up a rock and tries to strike it against his side, the way Charlie would with a match.)

Weakchin makes acquaintance with the village’s king (Mack Swain), who happily informs him that every man in the village is allowed a thousand wives. Unfortunately (and strangely), the first and only woman Weakchin hits upon is the king’s main wife. When the king discovers this, he and Weakchin fight about it. Weakchin sneakily sends the king over a cliff and quickly proclaims himself the new king, his first order of business being to consummate the marriage of his main wife.

But the real king is rescued and knocks Weakchin over the head with a huge rock, just in time for Charlie to wake up at a park bench and realize…it was all only a dream. (This was far from the last time Chaplin would use the dream cop-out finale; between him and Buster Keaton alone, it became a cliché long before TV sitcoms ever got to it.)

His Prehistoric Past is cute enough, but it was obviously time for Chaplin to move on to bigger and better things.