In the wake of Disney’s news that the trailer for the latest Star Wars movie will be playing in select theaters on Friday and Saturday, fans of the series say they will pay full admission just to see only the 88-second trailer. It has been further reported that Star Wars fans did the same thing in 1999 when previews for the long awaited Episode I: The Phantom Menace were screened.

This action is apparently very newsworthy to some readers, but I have to report that it is not without precedent.

In 1995, Carrotblanca, the first new theatrical Bugs Bunny cartoon in years, opened as a curtain-raiser for The Great Panda Adventure. One day on my lunch hour, I drove to a local theater, paid full admission, enjoyed Carrotblanca, and happily left to go back to work.

So to sum up, I invented the concept four years before the Star Wars crowd did. Now, somebody is going to tell me that they did something similar with their favorite short subject or trailer long before I did — in which case, I will copyright the concept as my own. 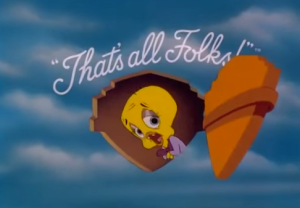