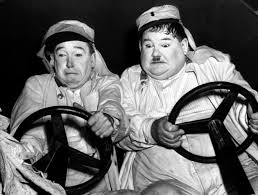 The Flying Deuces is usually dismissed as one of Laurel & Hardy’s back-burner numbers, but it’s probably their last movie where they operated at “full speed.” As L&H biographer Randy Skretvedt has meticulously detailed, it was the only non-Hal Roach-produced feature where Laurel was allowed his usual creative control. The movie gets right down to business and then breezes along for just over an hour.

Here, Stan and Ollie are a couple of Des Moines tourists in Paris. (How a couple of nondescript Iowans made it all the way to France is the first of this movie’s great, unsolved L&H mysteries.) Ollie has a schoolboy crush on Georgette (Jean Parker), the local innkeeper’s daughter, who milks Ollie for candy and laughs while neglecting to tell him that she’s already married to Francois (Reginald Gardiner), a Foreign Legion officer. (As opposed to the usual, outright shrewish L&H mates, Georgette seems downright passive-aggressive. Another unsolved mystery.)

Ollie’s “courting” scenes, and his dainty reactions when Georgette kindly but firmly snubs him, are among the great Ollie-as-courtly-Southerner routines. (After the snub, Ollie takes a leaf from Greta Garbo and declares to Stan, “I want to be…ay-lone.“)

Eventually, Ollie decides there is nothing left but to commit suicide. But he doesn’t want to be that much ay-lone — he decides to take Stan with him. (Ollie’s explanation to Stan is one of their best-ever pieces of dialogue.) All this, plus a runaway shark in the river where Ollie intends to off himself, result in a funnier mock-suicide scene than Charlie Chaplin’s in City Lights. (At one point, the shark’s fin pokes Ollie’s upturned behind, and Ollie, unaware of the shark’s presence, turns to Stan and gently commands, “Don’t do that.” Unsolved Mystery No. 3: What did he think Stan was doing to him, anyway?)

Eventually, Francois appears on the scene and advises The Boys to join the Foreign Legion to help Ollie forget his unrequited love (a/k/a Mrs. Francois, though Francois happily doesn’t know that). Much of the rest of the movie’s comedy results from Stan and Ollie’s tragic misconception that they need stay in the Legion just long enough for Ollie to forget, then they can shuffle on back to Des Moines. This eventually results in Stan and Ollie being sentenced to a firing squad at dawn, before which Stan tries to placate Ollie by playing a Harpo Marx-like number on his bedsprings. (For once, the unbridled scope of Ollie’s camera-looks matches their equally outrageous reason for being.)

They barely escape their sentence and end up in a runaway plane — a hilarious sequence which, if perhaps not completely convincing, is still far more satisfying than the 25-cent car ride we got from them in County Hospital.

Between the movie’s “freak ending” (for once, an oddly touching one), and the movie’s rich use of L&H/Roach co-stars (James Finlayson, Charles Middleton essentially reprising his role from Beau Hunks, and Rychard Cramer in an uncredited but appropriate cameo), The Flying Deuces is quite above-average among L&H’s later movies.

TRIVIA NOTE: This is the movie on which set Oliver Hardy met a script girl named Lucille Jones, who became Mrs. Hardy in 1940.

(I have also written a blog entry that details the story behind the making of this movie. Click here to read it.)