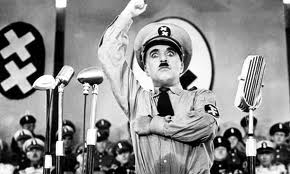 The Great Dictator, Chaplin’s first “all-talking” movie, is not a perfect film – there are dead spots here and there, and it wavers nervously between political farce and humanistic melodrama. Yet it is as compelling as anything in the Chaplin canon.

For one thing, you couldn’t find a movie that is more “of its time.” Chaplin’s uncanny resemblance to Hitler (they were also born within a week of each other) inevitably dictated (sorry) that Chaplin would have to take on the monster of his era. Chaplin later said that, had he known of the horrors of the actual concentration camps (portrayed fairly benignly here), he could never have made this movie. Yet one should be grateful he took on its subject matter at all, as history tells us how pacifist much of Hollywood (and America) was willing to be at the time.

The story concerns Chaplin’s version of Hitler, “Der Phooey” Adenoid Hynkel, and his country of Tomania, which he hopes to ruthlessly expand to include the entire globe. (Lest there be any doubt about this goal, there’s the movie’s famous, wordless scene in which Hynkel makes love to his “intended” by dancing and playing with an inflated globe of the Earth.)

Chaplin also plays Hynkel’s inadvertent double, an innocent Jewish barber who comes upon Hynkel’s Tomania after years in a psychiatric ward following World War I. The barber returns to his modest Jewish community and his business, thinking that everything is back to normal, only to be thrust into the center of anything-but-normal.

Chaplin’s burlesque of Hitler can be described only as spot-on; even the gibberish is perfect. As for the age-old question of whether the barber character is an extension of Chaplin’s Tramp, all you can do is look at the derby hat, toothbrush moustache, and waddle-walk, and think to yourself: He sure ain’t Monsieur Verdoux.

The movie begins a bit clumsily, as it’s pretty obvious that Chaplin is trying to do some silent-movie comedy at sound speed. But soon enough, the movie gets in sync and provides many memorable set-pieces: the globe dance, the barber shaving a customer in time to the radio music, the coins in the pudding, etc.

And this movie should stand as the final word to any critic who says that Chaplin never let another actor be his equal or upstage him. To a man (we’ll discuss the woman in a moment), Chaplin the director gets wonderful performances, of varying kinds, from his peers. Reginald Gardiner is rather touching as Schultz, the Tomanian officer who grants the barber some slack due to their shared past. Comic veteran Billy Gilbert is adorable as Hynkel’s flunkie Herring, forever sputtering and hoping for a ray of Hynkel’s approval. Henry Daniell is just fascinating as Hynkel’s advisor Garbitsch, bringing more to the role than seems asked of him; you get the feeling Garbitsch could have been a powermonger to overtake Hynkel if Chaplin had let him. The most sober (without being maudlin) of the downtrodden Jews is the cynical Jaeckel, understatedly played by Maurice Moscovich.

And let us give a manic salute to Jack Oakie for his Mussolini take-off, Napaloni. Chaplin gives Oakie generous leeway to show Napaloni’s passive-aggressive superiority to the neurotic Hynkel, and Oakie makes the most of every minute he’s on-screen.

Then there’s the famous finale, where the barber is mistaken for Hynkel and is called upon to address the world just before Hynkel’s forces are set to take over a nearby country of refuge. Chaplin famously “dropped the mask” here and delivered a heartfelt, six-minute speech devoted to humanity. The speech has mostly been a sore spot, even among many Chaplin buffs, since the movie was first released. And I have to say it: The speech works for me.

Of course, the speech is very out-of-character; it’s doubtful that the simplistic barber could conjure up such verbosity on the spot. That leaves Chaplin-the-celebrity addressing us, and many people have said he should have shut up then and there. But whenever I watch and hear that final speech, I think about 1940 and how much different (and presumably nicer) the world would have been if the real Hitler had found it in himself to say something like that. And aren’t movies just wish-fulfillment, anyway? On those terms, I can accept that speech quite handily.

(If the speech is missing anything, it’s that comic punctuation Chaplin used to include — a gag that would “snap” the pathos and keep it from getting too icky, as in City Lights when the Tramp lingers on the sight of the blind girl and she unknowingly throws water in his face. Maybe the speech could have been “leavened” by a cutaway or two to Hynkel having been forced into taking the barber’s place at the insane asylum, sitting bound-up in a strait-jacket and going into hysterics as he listens to the barber giving his power away.)

What I find much harder to ignore (or accept) about the movie is Paulette Goddard as Hannah, the simple, modest cleaning woman of the Jewish ghetto. Hannah is a poorly written character to start with – she’s little more than Chaplin’s love letter to Goddard (who was Mrs. Chaplin at the time) – and Goddard herself doesn’t add much to the role. Hannah is forever giving “Rah-rah, let’s beat those nasty storm troopers” speeches to the point of tedium. One such speech occurs when Hynkel, in an effort to finagle a loan from a Jewish businessman, decides to temporarily quit persecuting the ghetto’s Jews. When the storm troopers unexpectedly treat Hannah and the barber politely, Hannah looks straight into the camera and expostulates about the world’s goodness in a way to make you turn away in embarrassment.

Complaints aside, The Great Dictator remains compelling and often hilarious Chaplin viewing. It was his biggest money-maker to date, so there must have been at least a few other people who agreed with Chaplin’s sentiments in that closing speech.