The movie’s title is a bit of a misnomer, because in Should Married Men Go Home?, the married man — Ollie — is home. In a surprising turnaround from the usual situation, the movie opens on a blissful couple buried in the Sunday newspaper. Who’d have guessed that Ollie would or could be happily married? 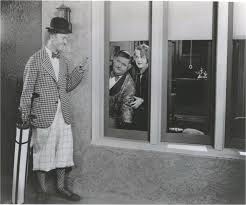 It takes only the sight of Stan marching towards their house to set the surprisingly content Mrs. Hardy (L&H vet Kay Deslys) into a tizzy. In a routine later reprised in the more familiar L&H sound short Come Clean, Mr. and Mrs. H. try to pretend they’re not home — even when Stan is rapping their door so hard, you can see the indentations he makes in the wood.

Stan slips a note halfway under their door, and Ollie, never content to leave well enough alone, pulls the note all the way through while Stan is still present, leaving Stan to wonder how the door swallowed the note. (One of Beanie Walker’s greatest subtitles tells us that Stan has “a mind of his own but no great demand for it.”) Eventually, of course, the ruse is exposed, the Hardys politely invite Stan in, and Stan becomes the ’20s precursor of a generations-later, great “SNL” John Belushi sketch: The Thing That Wouldn’t Leave. 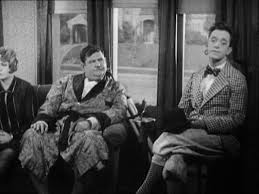 Then he spots Ollie’s phonograph player and goes to wreak havoc on it — but Ollie, at a condescending peak, tells him he’ll handle it — “You might break your other foot!” Ollie’s just as bad, though — he’s so wound up, he tries to crank up the player and turns it into an exploding jack-in-the-box. Mrs. Hardy finally gives up on domestic bliss and tells Ollie to beat it, whereupon Ollie immediately strips out of his Sunday best to expose golf togs underneath. I guess he knew the domestic bliss couldn’t last long, too.

Stan and Ollie proceed to a golf course where, conversely, the comedy becomes a little less free-wheeling. They pick up a pair of female golfers to make a foursome and, in another precursor of a later L&H sound skit (in Men ‘o War), they try to court the girls with only fifteen cents between them (and all of that was Stan’s). Ollie magnanimously tells Stan to forget buying a drink for himself and use the money only on him (Ollie) and the girls. The routine is funny but not as neatly or funnily capped as in the later movie. Here, a subtitle tells us that Stan eases out of his debt by proffering his watch (“It was that kind of watch”). 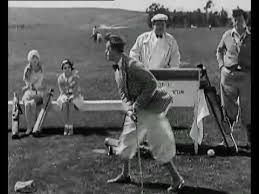 From here, the duo go on to wreak havoc on the golf course and its many inhabitants, among them a toupeed (but not for long) Edgar Kennedy. The movie’s final third is funny enough but is more fascinating for architectural reasons. As with all early L&H comedies, it’s amazing to see how much undeveloped land there was in ’20s L.A.; there seems to be nothing beyond the golf course but the Pacific Ocean. And talk about undeveloped acreage — this golf course has more mudholes than a Culver City street. The Boys even pull Kennedy out of one of the mud puddles, like a rabbit out of a hat, for the movie’s capper.

As a minor number, Should Married Men Go Home? is a pleasant enough time-killer, although you’d think with a killer golfer like Babe Hardy as an on-the-set consultant, the domestic scenes wouldn’t be funnier than the golfing ones.