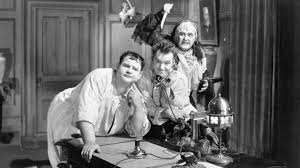 The most imaginative thing about The Laurel-Hardy Murder Case is its title. It begins with an expository dialogue sequence that could have been funny, if it hadn’t been so drearily photographed (by George Stevens, of all people). The soundtrack music for this scene was borrowed from the silent score for L&H’s Wrong Again, where it was far more appropriate than it is here. And then there’s nowhere to go but down.

Ollie reads a newspaper notice about the will reading of the late Ebenezer Laurel and automatically figures that he and Stan will come into some quick cash. It’s always a bad sign when Ollie is more bullying than usual. Here, when Stan first calls the question of Ollie’s part of the inheritance into question, Ollie first tries to guilt-trip Stan into letting him have half the dough, and when that doesn’t work, he just plain yells Stan into submission.

But then, does it really matter? Ebenezer Laurel is suspected of having been murdered, so all potential heirs are locked up in the mansion for the night. The movie makes no comedic use of the fact that Ollie’s belligerence got him only an evening in a spooky mansion instead of the expected big bucks. And the “spooks” in this household are well below average — roaming black cats, bats dangling from strings, and the like.

Most dreary of all (spoiler alert) is the movie’s “It was all a dream” cop-out finale (not the last time L&H would put this wheezer to use). It’s another of those cliches that might have been fresh in its day but has been worn thin by decades of unimaginative movie and TV writers — capping off a movie that wasn’t very imaginative to start with.