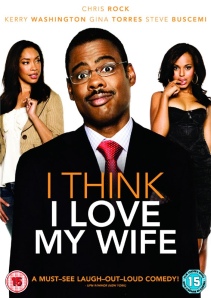 Don’t let the R rating fool you. The title of Chris Rock’s comedy I Think I Love My Wife reflects the timidity of its subject matter and of Rock’s movie persona — which, strangely, is at direct odds with his funny, smart, and incisive stand-up act.

Rock’s minimal impact might be somewhat excusable if he was just passing through the movie, but since he also co-wrote and directed it, he shoulders much of the blame for this non-comedy. Rock plays Richard Cooper, a high-rolling executive who’s too dumb to realize he’s having a mid-life crisis. Richard has a seemingly happy family life, but every time a curvy woman passes by, his eyes get roving and his marriage gets itchier.

Kerry Washington plays Nikki Tru, a character whose problems start with that porn-star name. And unfortunately for Washington — whose talent has shone brightly in films such as Save the Last Dance — writer Rock has done little to raise her character above that level.

Nikki, an old friend of Richard’s, is what kinder people would call “on the prowl” and cattier people would dub “a player.” The first time Nikki shows up unannounced at Richard’s office, wearing a barely-there red skirt, the office’s females size her up with an unflattering accuracy. (Her idea of a fun time is to throw dollar bills out Richard’s office window and watch pedestrians skitter to grab them.)

For a good (actually bad) part of the movie, Richard is surprisingly dumb about Nikki’s intentions. Whereas any smart married man would have security officers quietly remove Nikki from the building, Richard continually chats up Nikki behind closed doors and then wonders why everyone bad-mouths her.

The audience knows where this is going long before Richard (and, seemingly, writer Rock) ever do. Nikki strings Richard along for a while, eventually he cuts her off, then he misses the thrill of the hunt and seeks her out all over again. And even though there’s every reason to sympathize with Richard’s wife Brenda, Gina Torres plays her mostly as an uptight, demanding prig.

The movie exhausts every cheatin’-heart cliché you’ve ever seen. Rock has acknowledged Woody Allen as a comedic influence, and sadly, a bit where Richard tries to discreetly purchase condoms is a direct steal from Allen’s comedy Bananas. And the scene where Richard deals with the prolonged effects of Viagra is as, er, painfully protracted as Richard is.

The movie’s sole bright spot is Steve Buscemi as George, Richard’s philandering co-worker. Even though George is a cheater himself, he offers marital advice because he knows Richard’s in over his head. George is the only novel conceit in a movie that otherwise comes off as an R-rated episode of “Love, American Style.”