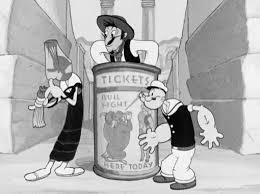 A barker in front of a bullfighting arena offers a free ticket to Popeye to see a bullfight, but he tears up the ticket because bullfighting is “inkind to aminals.” But when sultry senorita Olive Oyl (reprising her make-up routine from For Better or Worser) enters the arena, Popeye drops his animal-rights pose and puts the ticket back together to get in.

Popeye is mistaken for the toreador and is tossed into the ring. He still refuses to fight the bull, at least until the bull threatens Olive.

The perfect Popeye combination platter: wonderfully fluid animation, zippy plotline, and superb gags (two prize-winners: the bull’s bull-friends cheering him on, and Popeye’s wacko post-spinach toreador get-up). In a novel approach to the Fleischers’ usual how-do-we-work-in-the-spinach dilemma, a booing crowd angrily throws vegetables at Popeye, including you-know-what. (But why canned spinach among the fresh veggies? Oh, well, at least they got it in.)

A delight from start to end (and for cartoon buffs, a perfect bookend to Bugs Bunny’s later bullfighting gem Bully for Bugs [1953].)