The line for critical objectivity ends at The Rocky Horror Picture Show. Either you love this one, or you just don’t get it. (Count me among the former.)

The story centers around super-square high-schoolers Brad Majors (Barry Bostwick) and Janet Weiss (Susan Sarandon, most definitely in her pre-Oscar days). They get engaged and prepare to meet up with an old teacher of theirs, when their car gets a flat tire. The only place for help is a nearby castle run by a demented doctor named Frank N. Furter (Tim Curry) — and brother, the kind of help he offers. 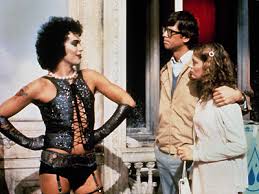 The movie’s legend has long been part of modern film folklore: how rock impresario Lou Adler picked up an obscure stage show from L.A. and had it made into a movie; how the movie was considered a flop because it only attracted about 50 people per showing, until someone realized that it was always the same 50 people; how it was moved to midnight screenings and became an established cult classic.

And of course, part of the legend is the show-within-a-show, where moviegoers come dressed as their favorite Rocky Horror characters, bring their own props to the theater (such as water guns to shoot during a storm scene in the movie), and shout dialogue cues at the screen. (When an audience member yells out, “What’s white and sells hamburgers?”, a screen character says, “Didn’t we pass a castle down the road?”)

Of course, the movie is best seen at a full-participation public theater. But if you strip away the midnight extras and watch it on DVD, the movie still has much to offer, such as:

* Gloriously trashy sets and color — it’s a treat just to look at.

* References to seemingly every movie ever made. Just for starters, check out all the sci-fi film reference in the movie’s opening theme. And of course, there are the obvious references to Frankenstein, with the spooky castle, the mad scientist, and his unique creation.

* A terrific soundtrack of rock songs, all composed by Richard O’Brien (who plays Frank’s flunkie, Riff Raff, and who also wrote the original play and its screen version).

* Wonderful performances, from everyone from Bostwick and Sarandon to heavyweight rock star Meat Loaf (in an all-too-brief turn). And then there’s Tim Curry, whose fishnet-stockinged Frank made an indelible mark upon pop culture with the first swish of his satin cape.

The DVD version includes the film’s concluding song “Superheroes” (formerly available only in the British movie version) and an alternate soundtrack where you can learn the participation “script” without having to go out at midnight.

Whether you’re a “virgin” (the cultists’ term for Rocky Horror first-timers) or veteran, it’s definitely worth the time warp.