Every time I came across a post today about the death of Robin Williams, it made me sad.

Not so much because I was a huge fan. I used to be. Like everyone else in America, I gobbled up “Mork and Mindy” and Williams’ TV appearances in the late ’70s and 1980’s. But in recent years, to me, his shtick seemed like that of a crazy relative who was once funny and now doesn’t know when to shut up. (Think I’m being too insensitive? Show of hands — how many of you regularly watched Williams’ recently-cancelled CBS sitcom “The Crazy Ones”?)

No, the news made me sad for age-old reasons. It goes back to the old poem “Richard Cory,” about a rich man whom the “regular folk” envy and who think the guy has got it made…until one night when Richard Cory kills himself with a gun.

Here was Williams, a guy who seemed to have everything — decades of fans, a huge body of TV and movie work, an Academy Award — but in the end, it appears that he didn’t have enough of something he needed. 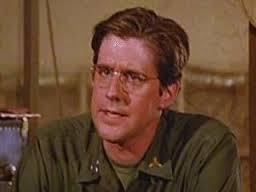 It also reminds me a later-era “M*A*S*H” episode. (I’m writing this from memory, so forgive me if I don’t get the synopsis perfectly correct.) In this episode, a renowned surgeon (played by Edward Herrmann, above) visits the camp and ruffles Hawkeye Pierce’s feathers with accounts of his exploits. Comes a huge slew of wounded soldiers to be treated, and the famous surgeon is there briefly to help and then nowhere to be seen.

When Hawkeye and B.J. track him down later, they see that the reality of war has gotten to him. He’s crouched in a corner, wringing his hands, muttering Shakespearian-like about how he can’t wash the blood off.

As Hawkeye and B.J. leave the man, B.J. says, “I thought he’d be the last one to crack under the strain.”

Hawkeye replies, “I know. That’s what scares me.”

If anything positive can be retrieved from the death of Robin Williams, it is the hope that everyone will be less quick to judge people who are overly weighed down with mental issues. You can’t snap out of it (at least not quickly), and a quick day out in the sunshine won’t help. So just because you are (thank God) not going through the same mental agony as that person, don’t brush them off and tell them to “Get over it.”

And if you are depressed — not just having a bad day depressed, but you can barely get out of bed depressed — please seek help. Again, the healing process doesn’t take place overnight, and it is often quite painful.

But for the past 24 hours on the news, you’ve seen what the alternative is.