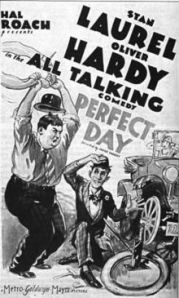 Legend has it that Perfect Day was to have been one of L&H’s three-parters–preparing for a picnic, taking off, then the picnic itself–but that the first two parts yielded such great comedy that the third part was deemed unnecessary. Whether the deletion was unplanned or deliberate, the film is Laurel & Hardy at their simple best, laboriously preparing for a task that never gets off the ground.

Critic Walter Kerr has mentioned the inevitability of Laurel & Hardy’s comedy–you see a close-up of a thumbtack on the floor, and you just know that Ollie will land on it somehow. Every such opportunity that provides itself here–a swinging door, an uncle (Edgar Kennedy) with a gouty foot–comes to full blossom.

As an early talkie, the film also uses sound to great effect. The endless rounds of good-byes from neighbors perfectly illustrate how carried away goodwill can get. And one of L&H’s most famous gags occurs when a frustrated Ollie hits Stan on the head to a great reverberating effect.

Also, listen for a surprising blooper that got past the censors. When the family is about to take off in their car, they see the local parson walking down the street and realize they must not be seen doing something so leisurely on Sunday. As they pile out of the car, Edgar Kennedy fairly clearly utters a four-letter word. One wonders how many Saturday-morning L&H broadcasts have unwittingly broadcast that expletive.