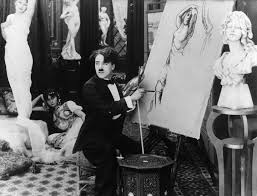 The Face on the Bar Room Floor is based on a melodramatic poem of the time. (You can read the poem and a bit of its history here.) Suffice to say, it’s about an artist who loses his lover to the wealthy man whose portrait he paints.

Charlie Chaplin plays the artist, recounting his story via flashback to some sympathetic fellow drinkers at a bar. Perhaps because the movie is intent on its burlesque angle, it mostly shies away from the Keystone “beating people up for its own sake” kind of laugh, which is to the movie’s advantage.

Chaplin, for the first time in his Keystone period, acts very melancholy (as befits the poem, of course). It’s interesting to watch, in view of how he will mix comedy and pathos later in his career. Yet already, he has learned how to take the sting off the pathos before it gets to be too much. At one point, the painter sits down and sobs in self-pity; when he gets up, he fails to notice a huge glob of white paint on his behind.

The best gag in the film is when the woman and the rich man leave, followed by the title, “Two Months Elapsed.” Charlie is a derelict out on the street, when who should he see but the happy couple that deserted him – followed by their requisite half-dozen kids.

Naturally, the movie succumbs to Keystone roustabout for the fade-out, but up to then, it’s a delicious parody.