Birth is the story of Anna (Nicole Kidman), a widow engaged to be re-married, who is accosted by a 10-year-old boy (Cameron Bright) claiming to be the reincarnation of her late husband Sean. Initially affronted by this kid’s claim, Anna eventually comes to believe him all too much.

Some reviews just write themselves, don’t you think?

Nevertheless, I’ll be happy to point out the obvious: No matter how you slice it, this premise involves some most unseemly matters. If Anna falls for this kid, it’s going to lead to the kind of subject matter that you’d never want to see in a mainstream movie, even if the MPAA let you. 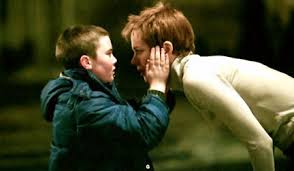 I’m relieved to report that the movie doesn’t quite go that far. At the same time, it veers closely enough to the edge — what with a boy-woman bathtub scene, and later a frank discussion about how the kid would handle Anna’s “needs” — that by movie’s end, you feel like a slimed Ghostbuster.

And what of this kid, anyway? The movie explains his presence so lackadaisically, it’s as though the movie was trying to reach a rare demographic of 10-year-old boys who suddenly want to be married to Nicole Kidman.

And don’t even get me started on Anne Heche, whose part in the story is supposed to be mysterious at first. Even so, from the very start, you can tell that her character has an interest in young Sean that has gone seriously awry.

The supporting cast, including 80-and-still-fabulous Lauren Bacall (What would Bogie think of this?), all have the same shell-shocked looks on their faces, as though they signed on for the movie before reading the script.