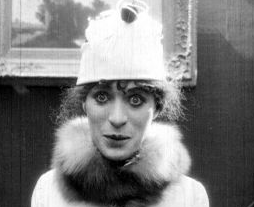 A Woman was Chaplin’s third and final film of female impersonation. You might say that this is the one where he really got it right.

The first half is the familiar Keystone scenario of putting some characters in a park and letting some comedy happen. A man is out on a Sunday stroll with his daughter (Edna Purviance) and his wife, both of whom fall asleep on a bench, giving the man a chance to make time with another nearby woman. While the man is off fetching a soda for the woman, Charlie happens upon the scene and makes time with her as well.

The man returns and knocks Charlie out for Round One. But then the woman blindfolds the man and plays hide-and-seek with him. Charlie comes to and gets hold of the man himself. Charlie leads the blindfolded man to a nearby pond, and you just know what’s going to happen, but Chaplin extends the gag beautifully: He sticks his cane into the pond, determines that the water isn’t deep enough to drown the man, and leads the man further down the pond before undoing his blindfold and knocking him into the drink.

Charlie happens upon the snoozing women and makes time with the daughter, who invites Charlie back to her house. The father eventually returns to the house and goes for Round Two with Charlie, who knocks the man out temporarily and then retreats upstairs. Charlie finds a woman’s dress and decides to play dress-up; Edna happens onto him and encourages him, bringing him downstairs to introduce to Daddy as an old friend of hers.

The surprising thing is how instantly womanly Charlie is. In his book The Silent Clowns, Walter Kerr says that the Tramp character’s strength and his undoing is that he can be whatever the situation requires: Ask him to be a boxer, he instantly turns into one; ask him to be a skater, and he’s the most fluid thing on wheels. (Kerr sees the downside as: Since this man can be everything, he can’t really be anything – he can’t be a single person, himself.) This movie asks Charlie to be a woman, and without the slightest bit of campiness, he delivers in spades. There are a couple of purse-lipped close-ups of Charlie-as-woman that must have sent some gender-benders of 1915 into spasms of delight.

The movie’s ending is roustabout, of course. It’s those moments that Chaplin “delivers” a woman without irony are the most interesting and funniest bits of A Woman.